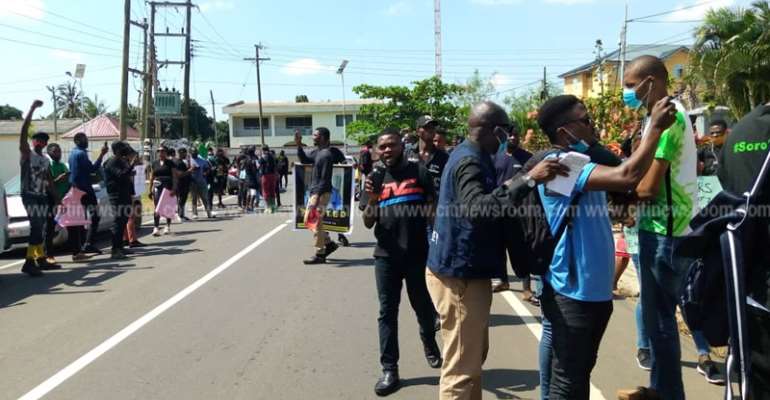 Some hundreds of protestors on Wednesday besieged the premises of the Nigeria High Commission in Accra to protest against brutalities in Nigeria.

The action follows the opening of fire on unarmed protestors in Lagos by Nigerian military personnel on Tuesday evening.

Some media reports from Nigeria indicated that over 40 persons may have been killed with many more wounded in the nationwide protests.

The incident at the Lekki tollbooth which involved the military personnel, in particular, prompted some media outlets in Nigeria to describe the day as Black Tuesday.

Some of the Nigerian youth who thronged the Nigeria High Commission held placards and were in black attire to express their displeasure of the happenings in that country.

This is the second time some Nigerian youth in Ghana have thronged their mission in Accra to protest and express their reservations over reports of brutalities being meted out on innocent citizens by the Special Anti Robbery Squad (SARS) in Nigeria.

One of the protestors told Citi News that: “SARS was formed to take care of special armed robbery cases in Nigeria but down the line, we noticed when our youth are doing their hard work, they arrest them and kill them. When the police arrest a criminal, they ought to take the person to court and then sentenced by the court if the person is guilty, but they arrest people and take them to prison without putting them before a court and when we rose against that, they are now killing our people. As we speak now, there are a lot of our people in prison that their families are not even aware of.”

Another protestor said, “Yesterday we witnessed one of the most outrageous atrocities of our life as a country because our compatriots were being slaughtered point-blank by the Nigerian military under the command of President Buhari because the military does not take action except they are ordered to do so. More than 150 peaceful protestors who are protesting for a new Nigeria were gunned down, and we want the international communities and the world to know.”

“President Akufo-Addo is the new chairman of ECOWAS, and he is silent but in times like this, silence means you are also supporting impunity and if this impunity in Nigeria is not stopped, it will spread to other countries,” another protestor said.

Another Nigerian who spoke to Citi News also said, “We are here to protest and to speak our minds to the Nigerian Commission in Ghana to know what we are going through. We can see what our brothers and sisters back home are going through and how they are suffering. We, the Nigerian youth in Ghana decided to come here and let our voices be heard but it is unfortunate that we didn’t get the right permissions to do the protest, so we decided to end it when we got here.”