Where Is The Former First Lady, Mrs Lordina Mahama? 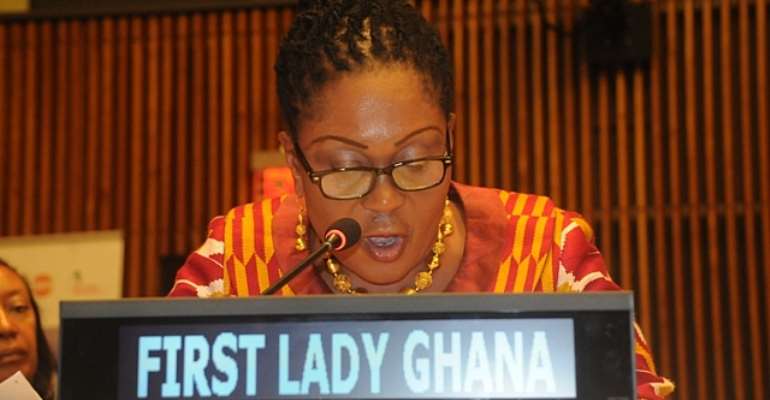 Lordina Mahama, though I may not consider as powerful as Agyemang Rawlings, had a good grip of John Mahama's administration. Some described her as the de-facto ''Prime Minister''. We even heard some powerful appointments were done by her and some big contracts could not go through without her approval. She was all over the place.

In fact, during the 2016 election campaign, her face was on many billboards with the then President Mahama as if she was the running mate.

Quite surprisingly, madam Lordina is conspicuously missing from all the campaigns of her husband. Is it not interesting? Why is Madam Lordina not following the campaign as we saw of her in the previous elections? Is everything OK under the broken umbrella?

We have seen Madam Rebecca and Samira trumpeting the achievements of the NPP and mobilizing lots of women in support of the 4 More 4 Nana agenda.

What could be the problem with Lordina? Is it any of the 4 reasons below or there could be other reasons?

We have heard stories that she is not in favour of her husband's decision to contest again after his miserable loss in 2016.

Others have said Asiedu Nketia doesn't want her anywhere near the campaign because she was part of the reasons for their defeat in 2016. She hijacked the campaign.

As if that is not enough, there are rumours that Mrs Lordina Mahama is not in favour of Grandma Jane's appointment as running mate. Why would the former first lady oppose the appointment of her colleague woman whose selection is said to have broken a so-called glass ceiling? Or Mrs Mahama doesn’t want any single woman as her husband’s running mate because of the ‘’Papa no’ syndrome? It beats my mind.

Another reason for Lordina's no show though comes from the office of former President Mahama, appears to be the most unintelligent of all. They say Lordina is afraid of insults in politics. So when she was enjoying from the largess of the state in 2012 and 2016 she didn't know about insults in politics? So, Mrs Mahama does not deserve insults in politics but it is Ok for Grandma Jane?

Any of the above reasons is bad enough for the NDC and John Mahama's rescue mission.