Women in France recount trauma of wearing masks during childbirth 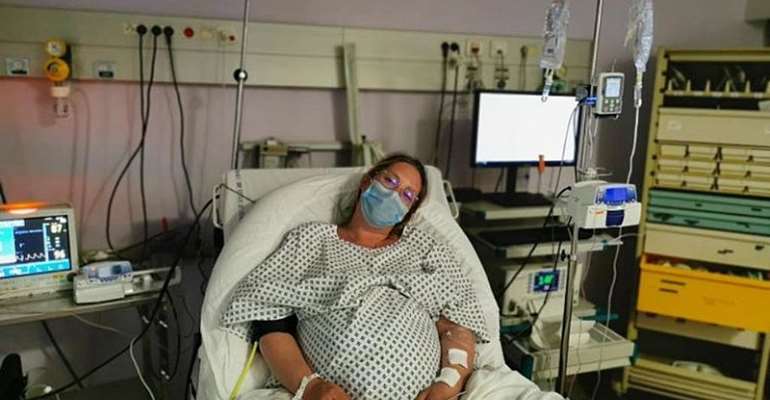 As cases of Covid-19 continue to rise in France, so is the pressure for expectant mothers to wear masks during labour and even delivery. While medical teams say they need to protect themselves, some new mothers are sharing their traumatic stories and denounce a form of “obstetric violence”.

This story was first published in the Spotlight on France podcast

“It was absolutely horrible, I felt like I was suffocating. You literally can't push out the baby and breathe at the same time with a mask on.”

26-year old Elodie has a bitter memory of giving birth to her daughter in a hospital in Metz in June this year. She was required to wear a mask throughout.

“When I told them I couldn't breathe, the staff said 'Yes you can, it's fine, you can do it'.

“I finally ripped off the mask before the last push, because I just couldn't get my breath.”

Pascalina, another young mother, had to have an emergency C-section because she couldn't push hard enough with the mask on.

“I felt like I was about to faint, so I moved my mask down,” she told France Info. “The obstetrician said 'OK let's go for a caesarean', saying I 'should have pushed harder'.

“I was so stressed I threw up. I couldn't stop crying, but in silence.”

Around a thousand women in France have relayed their ordeals using the hashtag #StopAccouchementMasqué (#StopMaskedChildbirth) since it was launched on Twitter on 8 September by Stop VOG, a collective campaigning against obstetric and gynaecological violence.

“It's shocking that women are forced to wear masks during labour and delivery in France,” the collective's founder and spokesperson Sonia Bisch told Spotlight on France.

“Women tell us they end up tearing off the masks, sometimes they vomit inside the mask, they can't give birth in these conditions. Many of them told us they couldn't push and had to have a forceps delivery or C-sections. It's scandalous.”

France toughened up compulsory mask-wearing in early September, but there is no protocol on what happens in delivery rooms.

The National College of French Gynaecologists and Obstetricians (CNGOF) published its recommendations in September and said mask-wearing during labour was 'desirable' but couldn't be enforced.

It's up to hospitals to decide, and Bisch said an increasing number were imposing the wearing of masks.

Data collected via their online questionnaire showed that “more than 80 percent of maternity hospitals in France imposed the wearing of masks during labour and even during delivery”.

And the numbers have gone up dramatically since the summer.

“During lockdown 46 percent of expectant mothers gave birth in masks, but now it's more than 80 percent,” Bisch explained.

No official studies have been carried out to establish the link between mask-wearing and complications during labour, but a report published by the collective in July pointed to a higher risk of fever, use of forceps or perineal tearing.

“Women who wore masks had more complications during childbirth, and they had more depression and post-traumatic stress too,” said Bisch. "So it's dangerous for their health.”

The collective considers being made to wear a mask during childbirth amounts to “obstetric violence”; an opinion shared by Adrien Gantois, the head of France's National College of Midwives.

“It's shocking to make people wear a mask during delivery,” Gantois told The Huffington Post. “Women have to be as free as possible to give birth the way they want.” Failing to respect that, he said, amounts to “obstetric violence”.

Bisch also questions the double-standard of women having to wear masks while undergoing intense physical effort while cyclists, joggers and people working out in the gym in France are exempted.

The World Health Organisation in fact recommended avoiding wearing a mask while exercising.

The CNGOF advocates mask-wearing during labour in order to protect medical staff.

Childbirth is rather unpredictable timewise and hospitals rightly say they cannot wait for Covid-19 test results to find out whether expectant mothers pose a risk to staff. The safest option is therefore to insist on masks.

“Spitting is a high risk factor in spreading the virus, and there's a lot of spitting during labour,” gynaecologist and CNGOF president Joëlle Belaish-Allart told France Info. “If all the medical teams fall ill, how will we be able to deliver babies?”

But Bisch maintains masks in the delivery room don't protect the way they should.

“They don't protect the medical team because at some point the woman will sweat, the mask will slip off or she'll tear it off. Some women told us they'd worn the same mask for 30 hours meaning they're useless.”

Like midwife Adrien Gantois, she insists the way forward is to make sure hospital staff are all better protected with high grade PPE masks. This is currently not the case.

“Some maternity wards say they don't have enough PPF2 masks. The government has to provide hospital staff with the means to protect themselves so that the women don't have to wear masks.”

Yet the government has been woefully slow to react.

“Since the start of the epidemic in March the government hasn't said a word about women's health and maternity hospitals,” raged Bisch.

When, on 9 October, Health Minister Olivier Véran was finally questioned on the subject he said he "could understand why medical staff would ask patients to wear masks" but would "look into it" and “tweet” his response.

“It's as if it only concerned women on social media, whereas it concerns thousands of pregnant women in France,” said Bisch.

The seeming lack of government interest in this matter says a lot about French culture.

“It shows that what women in France say doesn't count, that the government doesn't care about women's health and doesn't listen to women.

“France is a very reactionary, macho country,” she continued, “I'm sure that if men were giving birth you wouldn't have to wear masks during delivery.”

She cited the UK where the Royal College of Midwives asks medical teams to protect themselves and there's no requirement to wear a mask during childbirth.

The American College of Obstetricians and Gynaecologists does not impose masks in delivery rooms either.

The situation in France is now pushing some expectant mothers to look elsewhere.

“Some are going to Germany to give birth because they don't insist you wear masks.”

Elodie said she would have preferred to give birth in the UK or Luxembourg to avoid having to wear a mask, and where expectant mothers are given more support.

Her experience of childbirth in France under Covid has left her scarred.

“Your birth is not really your birth in France, you've got an image of the birth: being supported, being with your husband or anyone you want at the birth of your child. But you can't have that here. Sometimes you're left completely alone. I think it's a form of violence because I still have angst, a kind of fear.”