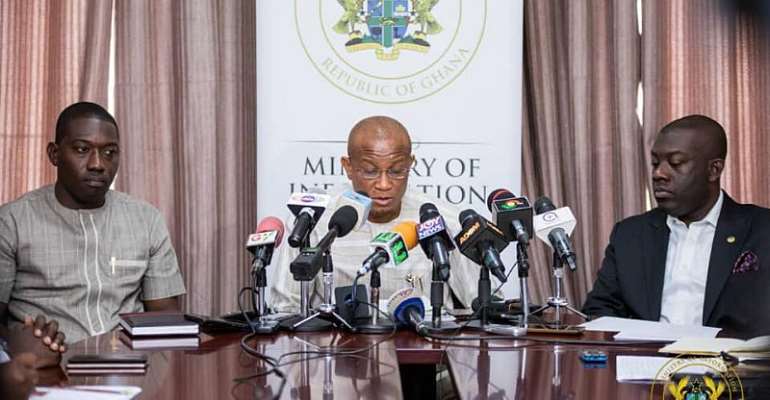 The ruling New Patriotic Party (NPP) has condemned what it refers to as attempts by the opposition National Democratic Congress (NDC) to create a false state of insecurity in the country.

A Deputy Campaign Manager for the NPP, Dr. Mustapha Hamid at a press conference on Wednesday, October 14, 2020, said the NDC’s action must not be tolerated by Ghanaians.

“The NDC through propaganda is creating a false state of insecurity in the country to play on the emotions of Ghanaians for electoral gains. Statements by its leading members affirm this assertion. The NDC General Secretary, Aseidu Nketiah in a report dated October 11, 2020, alleged that the government was issuing over 4,000 weapons from the state armoury to over 4,000 Pro-NPP vigilantes. This is to create a worrying state of insecurity to deceive electorates,” he said.

Referring to the NDC’s accusation of attempts by the government to intimidate members of the Volta Region from registering to vote in the 2020 general elections when it deployed military officers to the region, Dr. Hamid said: “The NDC’s reaction is further proof that the party only pretends to care about national security, but is quick to politicize security interventions when they see an opportunity to excite their bid.”

He said it was surprising that the NDC tried to blow the matter out of proportion knowing fully well that similar deployments had been done in the Savannah, Northern, and Upper East Regions.

He further explained that the decision to deploy security was to prevent the importation of the virus, a move other countries had also taken.

“However, in resorting to their old tricks of mischief and falsehoods, the NDC created the impression of intimidation on NDC.”

Mustapha Hamid also accused the NDC of setting up fake websites to churn out false stories to deceive Ghanaians.

MPs split heads as anti-LGBTQ+ bill to be laid in Parliament...
56 minutes ago