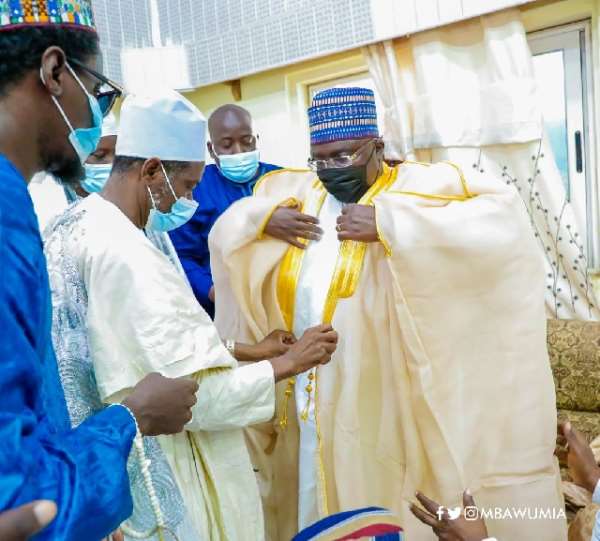 The leader of Jallo, a branch of the Tijaaniya Muslim Order in Ghana, Sheikh Abufayed Ahmad Abdulai Maikano, has made a public declaration to vote for President Nana Akufo-Addo and his Vice, Dr Mahamudu Bawumia.

The influential cleric made the declaration during the commissioning of an ultra-modern mosque complex by Vice President Dr Mahamudu Bawumia in Prang on Friday, October 9.

The mosque complex was built by Dr Bawumia for the Muslim community in Prang, and that act of kindness by the Vice President, supported by President Akufo-Addo, earned the duo plaudits from leading Jallo figures during the commissioning of the mosque.

Sheikh Maikano, who led the eulogies and appreciation on behalf of his people, declared that he will vote for the Akufo-Addo/Bawumia ticket in December because they have demonstrated a strong commitment to the progress and welfare of the Ghanaian people, especially the people of Zongos.

"This dream of building such a magnificent mosque remained a mirage until Allah brought President Akufo-Addo and Dr Bawumia to us, who promised to make our dream a reality," Sheikh Maikano said.

"What we are seeing today is the result of that promise made by Dr Bawumia and the President."

"This is so impressive because this request was made to others, but they did not help."

"Dr Bawumia is God sent, and we thank him and the President so well and we pray for Allah to continue to bless them. How could we build this without this support from them?"

Sheikh Maikano noted that showing gratitude is part of Islamic practice, as taught by the Prophet Muhammad, and in line with that, he pledged that he and his followers will vote massively for President Akufo-Addo and Vice President Bawumia on December 7 to show their gratitude.

"On December 7, I will vote for Nana Akufo-Addo and Dr Bawumia, in sha Allah as thank you for what they have done for us," Sheikh Maikano declared, with his followers endorsing with an applause.

The Islamic cleric added his stance is inspired by a call by the Prophet Muhammad to Muslims to be thankful to people who are of service to others.

"My justification for this bold declaration is that the Prophet Muhammad admonished us to be thankful to those who help us. The Prophet added that he that is not grateful to man won't be grateful to Allah."

"That's why we have to be grateful for this gesture by Akufo-Addo/Bawumia and voting for them is the seal of gratitude."

Speaking before he officially commissioned the mosque, Vice President Bawumia expressed gratitude to God "for building his own house."

"This is a house for the Almighty Allah and we have thanked Allah for this. Without Allah, this magnificent mosque wouldn't have been built. Allah made it possible and He built His own house,"

Dr Bawumia underscored the significance of building mosques to Muslims, and urged them to firmly uphold one of them, the promotion of unity.

"The importance of mosque to us, Muslims, cannot be underestimated. No matter how magnificent or small it is, we regard it as a sacred house of the Almighty Allah, and a place for our community to congregate and worship in unity, in obedience to Allah’s command," said Dr Bawumia.

"Mosques play significant roles in Muslim communities. Apart from bringing us together regularly to promote unity amongst us through prayers and other social gatherings, modern mosques also serve as centres for Islamic studies and research.

"As an ultra-modern mosque complex, it is our expectation that this beautiful edifice, in shaa Allah, will serve these purposes and further unite the Islamic community here in Prang, and its surrounding neighbours."

In a video message, President Akufo-Addo said, the town of Prang is renowned in Ghana and beyond as a centre for Islamic teachings and practice, and the construction of the mosque is a fitting tribute to the status of Prang as far is Islam is concerned.

President Akufo-Addo congratulated the leadership of the Jallo fraternity and Prang Muslims in general for the commissioning of the mosque.

The President hailed Ghana's enviable reputation as a religious-tolerant country, and urged Muslims in Prang to continue to live peacefully with their Christian brothers and sisters.’

Government to reclaim mined-out areas in Ghana
51 minutes ago