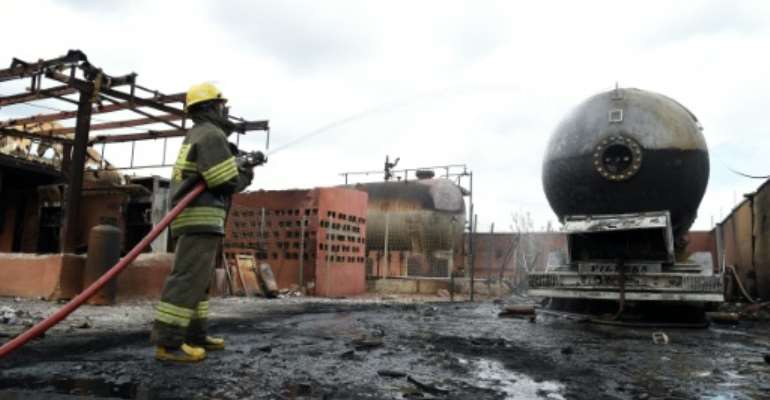 A running generator inside the gas depot was suspected of causing a spark that triggered the blast. By PIUS UTOMI EKPEI (AFP)

The incident -- the latest in a string of fuel accidents in Nigeria -- occurred at around 6:00 am as the truck was offloading gas at a depot in the district of Baruwa-Ipaja, Ibrahim Farinloye of the National Emergency Management Agency (NEMA) told AFP.

He said rescue workers promptly deployed to the scene.

"We have recovered five charred bodies," he said.

Three people -- a woman and her children -- were rescued, Farinloye said, while another emergency official said the total number of people injured had risen to eight.

Farinloye said those injured were receiving treatment "for severe burns" at a nearby hospital.

He said over 40 houses, 89 shops and many vehicles were burnt in the inferno.

A running generator inside the gas depot was suspected of causing a spark that triggered the blast, Farinloye said.

He said the explosion had been contained, adding that the authorities would probe the incident.

"Investigations indicate that this was an entirely avoidable incident caused by carelessness on the part of the operators," he said.

He urged "Lagosians to report unsavoury and dangerous practices within their neighbourhoods to relevant agencies".

Kelechi Uguru, a 30-year-old businessman and tenant in one of the burnt houses, said he had lost "almost everything to the fire".

"Our house was just a few metres away from the gas station. The impact of the explosion made part of our building cave in, while the other part was completely burnt," the father of two told AFP at the scene.

Victims try to salvage belongings trapped in the rubble of a house destroyed by the explosion. By PIUS UTOMI EKPEI (AFP)

"I have just a few things to salvage," he said, as he bent down to pick up pieces of items from the rubble of the building.

"I'm down and out. I appeal to the government to come to our assistance so that we can rebuild ourselves," he added.

As he spoke, firefighters battled to put out remnants of the fire.

Elsewhere, smouldering smoke and the stench of burnt debris filled the air around nearby buildings and vehicles.

Fuel accidents are common in Nigeria, often entailing pipelines or trucks transporting oil or petrol (gasoline), rather than gas.

Most people live in poverty even though the country is the biggest oil producer on the continent, with around two million barrels per day.

Some incidents happen when residents try to siphon off oil or petrol from pipelines or when tanker drivers crash on ill-maintained roads.

Last month, a petrol-carrying truck overturned on a road in Lokoja, the capital of central Kogi state, killing 23 people including students and burning several buildings and vehicles.

Also in September, a truck laden with gas exploded inside a plant in the Iju-Ishaga area of Lagos, leaving dozens critically injured and buildings and vehicles burnt.

In March, a gas explosion in the city killed at least 20 people, injured many more and destroyed around 50 buildings.

Angola President in Ghana for 3day visit
4 minutes ago