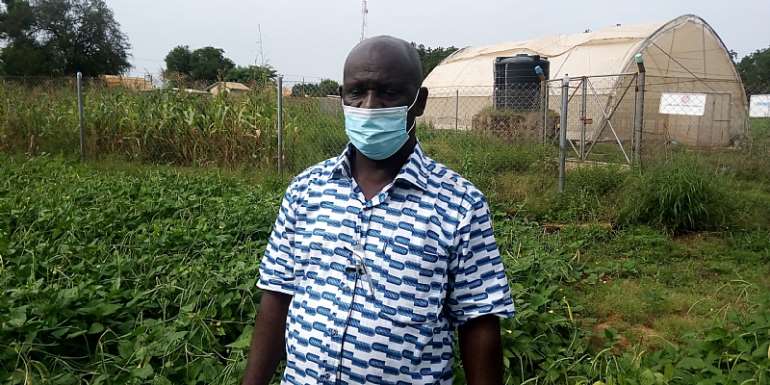 The Lead Scientist of the project at CSIR-SARI, Dr. Francis Kusi

The Manga Station of CSIR-SARI has engaged cowpea farmers along the Fumbisi valley in the Builsa South District in Upper East Region and other stakeholders in the cultivation of improved Cowpea varieties using residual moisture.

The Lead Scientist of the project at CSIR-SARI, Dr. Francis Kusi, speaking on the sideline of the programme, told the media that, one of the objectives of the project is to reach out to the under privilege, the marginalized, the deprived, less empowered farmer groups, communities or ethnicity when it comes to access to agricultural technologies and resources to increase their productivity.

Justifying the involvement of the cowpea farmers in Fumbisi, Dr. Kusi said, they contribute significantly to the production of cowpea in Ghana yet they lack access to adequate proven technologies to increase their production and productivity which he said probably could be due to the fact that the farming communities in Fumbisi are hard to reach by scientist and other stakeholders.

The farmers agreed with Dr. Kusi’s observations and added that Fumbisi is known nationwide for the production of rice, but many more production of other crops also take place there which do not receive adequate support like the rice production.

They were therefore much appreciative to Dr. Kusi, CSIR-SARI and ILLSR project for introducing improved varieties to them. According to Dr. Kusi, Fumbisi is the source of a landrace cowpea variety called ‘Alancash’ in Fumbisi which has attractive large seeds size and white seed quote colour.

He added that, although the seeds of ‘Alancash’ is attractive, the variety is unimproved and its photoperiod sensitive and for that matter, the farmers can produce it once in a year between October and December.

The two varieties, Wang Kae and Kirkhouse Benga, he said, unlike their landrace could be produced and harvest every 60 days (2 months) which, means between May and December each year, they can do at least 3 production cycles to generate more income.

The Builsa South District Crop officer, Abdulai Amadu expressed the hope that with the introduction of the two improved varieties under the Planting for Food and Jobs (PFJ) programme, the farmers can have access to the improved seeds at a subsidized price and adapt to the new variety.

He stated that the floods, as usual, this year, left in their wake large deposits of residual moisture along the valleys of Fumbisi, which is conducive for the cultivation of cowpea for the last quarter of this year.

At the end of the exercise, the about 80 participants most of whom were women farmers, were optimistic that, they will have enough cowpea to content with by the close of December this year.

We must tackle poverty as national security threat – Parliam...
52 minutes ago