THRILLER IN TARKWA: Who Threw The Sucker Punch? 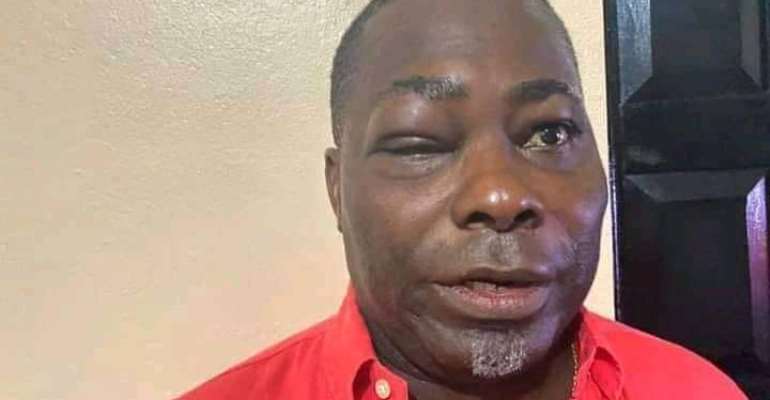 When the braggart allowed his braggadocio to take the better part of him at NPP meeting in Tarkwa--- the oldest mining city in Ghana, the strong would have none of it. Instead, both would ignore civility and throw caution to the wind. And it wouldn't take long King Kong would emerge victoriously.

So who threw the sucker punch?
It wasn't me. I just happened to be the match commissioner who watched the inglorious fight from afar, yet my intrepid eyes couldn't miss any proceedings in the ring. Notable among the spectators were Peter Mac Manu NPP National Campaign Manager and Lord Commey-- Director of Operations at the Presidency. It's understood the match itself couldn't go beyond round one. Why?

Somebody had the mojo. And just one blow, the Rambo would go down.

"I will beat you", cried the supposed aggressor.
His opponent would accept the challenge.
And I could hear him say: Bring it on if you think you've got the mojo to Rambo.

Oh, no-no. The thriller is on!
First, they duked it out. Then the gloves came off. Bissue's blow had been miscued Or was it misfired?

It was quickly followed by Duker's southpaw.
Actually, It came straight from the shoulder and landed on the face of the staffer. The bully got the beat.

One eye left bloodied. Humiliated.
Interestingly, the strong didn't leave the ring unscathed. He'd been 'Bissued' meaning he got bit by the braggart. Duker's right middle finger was bitten. Apparently, he got some stitches at a nearby clinic.

By the way, was the incident reported to the police?

If so was anybody charged with assault?
I doubt they did!
Here's George Mireku Duker's account.
The NPP Member of Parliament (MP) for Tarkwa-Nsuaem in the Western Region, blamed the last Monday's fisticuffs on Charles Cromwell Nanabanyin Onuawonto Bissue-- a presidential staffer who doubles as western regional secretary of the incumbent NPP.

The lawmaker told the Daily Guide-- a local newspaper that he'd complained to the regional executives that Mr Bissue has been supporting an independent candidate in the Tarkwa-Nsuaem Constituency against him in the December 7, 2020, Parliamentary elections.

“So at the meeting, I made the same complaint that there is an independent candidate in Tarkwa who is being supported by some regional executives so we should trash the issue here. After my presentation, I went to sit down,” he recounted.

“But before the meeting came to an end, Lord Commey asked Bissue to react to the issue I raised in three minutes. Bissue went for the microphone and said I used to be his friend but I visited him at his office one day and told him that he should not believe the President and allow people to do galamsey or illegal mining,” Mr Duker alleged.

Mr Duker said, “those present were all surprised at the comment from Mr Bissue because he was pitting me against the President and so Lord Commey went for the microphone and said ‘this is not the issue we want you to discuss’."

Even though Bissue was asked to sit down, he wouldn't budge. Instead,he chose to go to where he (Duker) was sitting amids threats that he'd beat him.

“He was coming to me as he shouted, ‘I will beat you!’ So, my chairman was even asking me to get up because Bissue was coming to me. Lo and behold! Bissue came to me and threw a blow at me and in defence, I also threw one at him but my finger went into his mouth and he chewed it," Duker alleged.

“I'd a deep cut at the middle finger of my right hand. I later went to the Jemimah Hospital for some treatment,” Mr Duker said.

Duker's account according to the newspaper had purportedly been collaborated by Wisdom Edom Gomashie, assistant constituency secretary of the NPP at Tarkwa Nsuaem.

There's always two sides to a story. Isn’t it?

So let's hear from Mr. Bissue too.
“I neither physically attacked nor bit the finger of the MP for Tarkwa-Nsuaem Constituency, Honourable Mireku Duker as widely reported. I was not the aggressor in this situation, as it is not in my nature, as anyone who knows me could attest,” Bissue said, denying media reports suggesting that he ‘chewed off’ the finger of the Tarkwa-Nsuaem MP.

If Bissue didn't bite Duker's finger then who did?

Was it an Angel from the heavens? Or one of Satan's bodyguards? The Western Regional Secretary of the incumbent NPP has described as outrageous the reports in the media, because they sought to misrepresent what actually took place at the Party’s meeting on Monday 21 September 2020.

He'd since issued a statement debunking what he's described as outrageous reports carried by a section of the Ghanaian media.

It seems the staffer has been counselled by the NPP leadership. Hence, his resolve to resort to the structures in the NPP to settle any differences 'amicably'.

“Much as I would like to publicize my side of the unfortunate incident, I am guided by the fact that the NPP has an election to prosecute and anything that distracts from the telling of the unparalleled achievements of this government will be a great disservice to the country and the Party that I have faithfully served. I am guided, as always, not by self-interest but by greater ideals and loyalties, and a firm belief that justice serves those who serve others, and that truth and honesty always prevails,” he said.

The Timely Apology
Indeed the Elephants know how to iron out their differences. One of the fighters Duker, the legislator has rendered an unqualified apology to all Ghanaians

And I think it's timely and is a step in the right direction.

"I'm so sorry," he says.
“My supporters and the party people know I’m not violent. I have never fought before but I couldn’t sit there and watch someone beat me. The laws of the country allow us to defend ourselves under certain conditions.

“I did not insult him and even if I did, he wouldn’t have heard from where I sat. He threw the first punch saying that I will beat you. We got angry and fought but I regret it. I want to say sorry to everyone. It hurts me that this happened. I’m so sorry. I never thought Bissue would do that but I really regret it,” he stated.

Paradoxically, both claimed they are not violent as what happened last Monday was uncharacteristic of them. Besides, they'd never fought yet they fought.

Good thing is none of them blamed the Devil for orchestrating the inglorious fight.