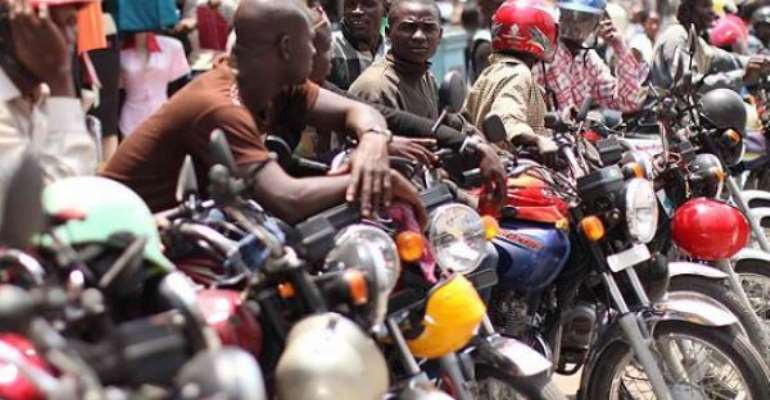 Intellectual Patriots, an advocacy group, has called for the outright rejection of plans by the opposition National Democratic Congress (NDC) to legalize "Okada business" when voted into power.

The Flagbearer of the main opposition NDC, Mr John Mahama, has promised to legalise the commercially use of motorbikes popularly known as Okada.

However, the Advocacy Group has described the move by the NDC as an unfeasible and bad alternative in its attempt to create employment as it would endanger lives and reverse the gains made at reducing road crashes in the country.

This was contained in a statement signed by Mr Joseph Gyamfi Yeboah, President, Intellectual Patriots, and copied to the Ghana News Agency (GNA) in Tema.

The statement said “assuming without admitting that the manifesto promise is feasible, it is not an alternative to providing livelihood but rather a threat, ” adding that it was not only retrogressive to the economic development of the country, but would imperil Ghanaian lives ultimately.

The statement questioned if legalizing motorbikes for commercial purposes was a practice worth considering, explaining that the country did not have designated lanes for motorbikes as they would have to compete with other vehicles and cause mayhem on the roads.

According to Mr Gyamfi Yeboah, “the non adherence of Ghanaians to Covid-19 protocols in spite of enabling laws, is testament that regulating the 'Okada business' in cities would end up in numerous fatalities as has become evident."

“Which motor bike stations are these 'OKADA' riders going to operate from? Are “OKADA” transport permanent jobs or is it just seasonal? Is NDC not setting a low standard for Ghanaians through the “OKADA” mantra?” The statement said.

The statement further questioned the reasons that necessitated the passing of the Road Traffic Regulations, 2012 L.I. 2180 in 2012 – which outlawed the commercialization of motorcycles and tricycles and whether those reasons were still relevant now.

“Ghanaians should stand up and ask the NDC to outline the processes they have put in place to legalize 'Okada business' because training, licensing and educating the riders will change nothing since the riders will end up in the streets to compete with private and commercial vehicles on the same narrow roads, ” it said.

The group described the move by the NDC as “a political gimmick ” and recommended that successive governments ought to focus on the expansion of the country's road infrastructure to reduce the effect of vehicular traffic, road crashes and safeguard the lives of road users.

As suggested by the Vice President, Dr Mahamudu Bawumia, the statement encouraged Okada riders "to opt for hire purchase cars for commercial purposes as a better alternative."

‘We’ll go hungry if we stop light fishing’ – Fishermen in El...
19 minutes ago