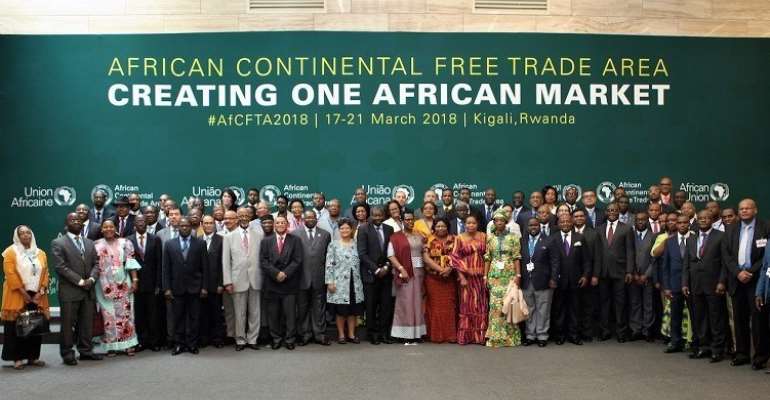 Th AfCFTA is intended to be a new platform for the continent’s economic growth. (courtesy twnafrica.org)

Ethiopian Prime Minister, Abiy Ahmed make a strong case for African nations to chart a course to bring prosperity to to the continent. However, much more is needed to plan for the creation of economic growth that Africa requires today and for its future population. Poverty for hundreds of millions of Africans must be eradicated. Over 600 million Africans without access to online electricity must be brought into the “light.” This requires that African leaders, with the African Union and Africa’s true allies should come together and produce a development program. A plan of action for a 5-10-20 year growth policy that must include minimally: electrifying the continent with a thousand gigawatts of electricity; high speed modern trains connecting the major cities and ports; modern all weather highways; creating a healthy manufacturing sector; and a state of the art health infrastructure system. We must think boldly about the the basic requirements needed for all Africans to live meaningful and productive lives.

“ADDIS ABABA – Africans must take responsibility for our continent’s affairs. We have all the ingredients we need to succeed, starting with a growing population – including a large and increasingly educated cohort of young people – and a favorable trade and investment environment. And now, determined to usher in an era of African peace and prosperity, we have a mature institutional platform through which to forge, articulate, assert, and defend our common interests under an independent, unified African foreign policy.

“For too long, Africa has been a strategic plaything of world powers. By bolstering its internal cohesion and economic integration, the continent can become a strong geopolitical force with an independent and unified voice on important global issues.

“At a time when protectionist beggar-thy-neighbor policies are on the rise globally, Africa is poised to implement a single common market in the form of the African Continental Free Trade Area. This pact will lay new foundations for continent-wide economic growth: the World Bank recently forecast that AfCFTA could boost Africa’s income by $450 billion by 2035 and lift 30 million people out of extreme poverty. In addition, closer economic integration within the region will inevitably make every country a stakeholder in its neighbors’ security, thereby advancing the greater cause of continental peace.”