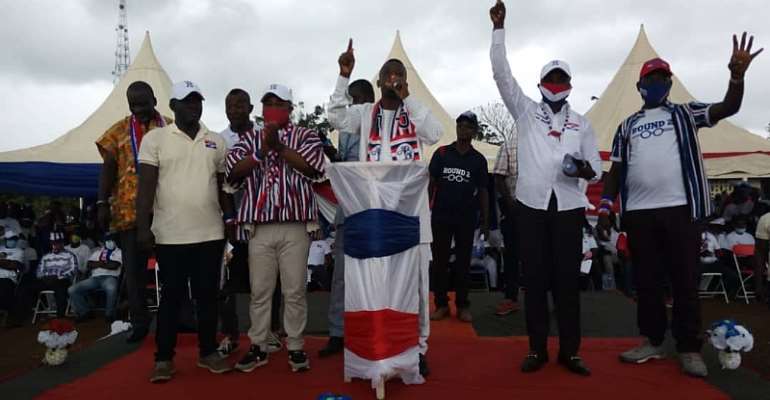 The Mpohor Catholic Primary School Park was full to capacity with NPP colours as party loyalists stormed the venue of the programme for their campaign team launch. The weather became atrocious and threatening but to the shock of everyone gathered, the party loyalists defied the rains to demonstrate their commitment and loyalty to their party by standing in the rains to listen to the speakers one after the other.

On his part, the Mpohor NPP Chairman of Council of Elders and Patrons, Hon. E. A. Amoah, observed that the real campaign will start after the launch. He said they will do retail campaign by moving into every house to sell the good message of the party.

In addressing the party loyalists, the Western Regional Minister, Hon. Garbby Kwabena Okyere Darko, eulogised them for the cohesion in the party. He also commended Hon. Alex Kofi Agyekum, the Member of Parliament for the constituency for throwing support for the candidate and working hard to ensure that the seat is retained. He explained to the audience the reason why the Mpohor-Apowa road had to be halted. He then went on to assure them that the road will be constructed and that JUSTMOH has started moulding culvets for it.

After the address of the regional minster, the campaign team was innaugrated amidst cheers of the party loyalists. The unity and cohesion of the party in the constituency reflected in the composition of the campaign team. The party loyalists went berserk on hearing the names of Hon. Alex Kofi Agyekum and Hon. Ignatius Asaah Mensah, the MP and the DCE respectively as members of the team. This happened because the primaries was fiercely contested by the sitting MP and Mr. John Sanie, the candidate, with the DCE supporting the sitting MP.

The rains intensified after the swearing in of the campaign team but the other speakers and the party loyalists defied it and continued with the programme.

Hon. Ignatius Asaah Mensah, the DCE for Mpohor District, outlined the achievements of the party under their tenure. He alluded to classroom blocks, water projects and other school infrastructural projects that his outfit and the MP introduced. He also commended the MP, Hon. Alex Kofi Agyekum, for lobbying GETFund school infrastructural projects like the science laboratory project at Mpohor Senior High School.

The sitting MP, Hon. Alex Kofi Agyekum, who was full of jabs against the NDC, affirmed that they will win against the NDC with their achievements. He said the NDC Parliamentary Candidate has ever been defeated by him so he would give all the strategies to his successor to defeat him again.

Hon Joe Ghartey, the Minister for Railways and MP for Essikado-Ketan, who stormed the venue with NPP Western Regional Executives was also full of praises for Hon. Alex Kofi Agyekum, the sitting MP for his good works.

The last to address the audience was Mr. John Sanie, the NPP Parliamentary Candidate for the constituency. Before he spoke, he was introduced by Hon. Alex Kofi Agyekum, the sitting MP, who lost the primaries to him. He began his speech by introducing his wife and mother to the people and acknowledging them for positively affecting his life. He also thanked all the party loyalists for their love for the party.

He went on to share his thoughts on the free SHS policy. He recounted how he struggled to acquire his secondary education and observed that he becomes sad anytime he hears people speaking against the policy.

He observed that the WASSCE is a very good requirement for the military and other security services so the youth should take advantage of the policy. He also alluded to other job-creating policies of the Nana Addo led administration and admonished the party loyalists to campaign on those achievements.