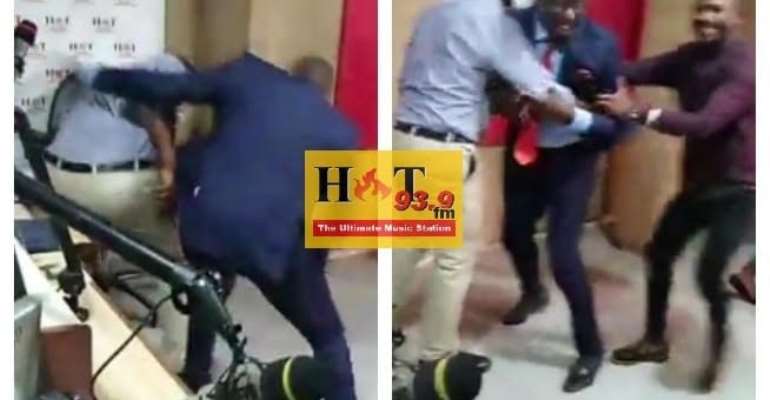 Making headlines in a recently sighted video were two-party communicators, Gyasi ‘Carl’ Appiah of the New Patriotic Party(NPP) and Haruna Amaliba of the National Democratic Congress(NDC), who were seen in a scuffle over a GH₵ 50 note at the studios of Hot 93.3 FM, during the ‘Dwene Ho Biom’ political show.

In the video, the two-party representatives were involved in an episode of ‘abduction and extraction’, and a battle of strength, swiftness and sagacity.

Clearing the air was the NPP communicator, Gyasi Appiah who explained the fight as a mere, friendly friction between himself and his “brother” Haruna Amaliba.

According to Carl, his money fell on the floor at the studio and his friend from the opposition party NDC stepped on it to prevent him from retrieving his money. What we saw in the video, according to Carl’s narration, was only a success story of his attempt to recover his money.

By this, he admonished the public that despite their political differences, political players must learn to harmonize and coexist peacefully with each other.

He, in addition, revealed that, “it is one of those things” and explained that the political games do not affect their social lives, unlike what their debates might suggest.

A/R: Journalists on tour with Regional Minister involved in ...
14 minutes ago

Focus on promoting human rights, be swift and fair in applic...
16 minutes ago