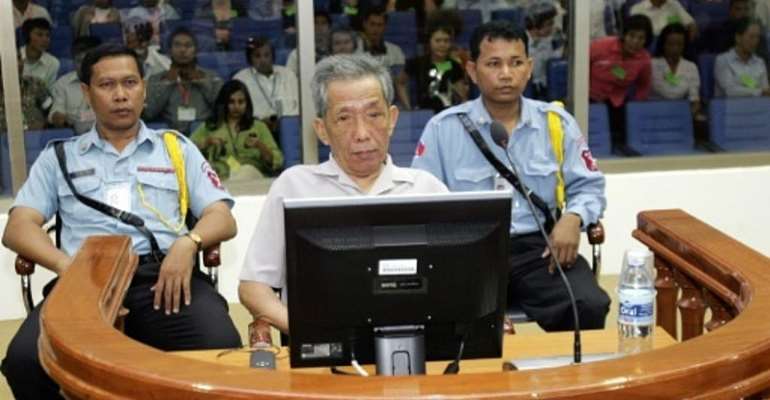 Duch, the Khmer Rouge commander who oversaw the torture and death of thousands of men, women and children in the 1970s, has died ten years into a life sentence.

Kaing Guek Eav, better known as Comrade Duch, died on Wednesday at the age of 77 at the Khmer-Soviet Friendship Hospital in Cambodia's capital Phnom Penh.

He was serving a life sentence for crimes against humanity for his role in the Khmer Rouge Maoist regime that controlled Cambodia from 1975 to 1979.

During its reign, Duch ran a prison and presided over the torture and executions of over an estimated 12,000 men, women and children.

According to AFP news agency, a doctor's letter confirming his death indicated that Duch had symptoms of "acute respiratory distress".

Journalists in Phnom Penh saw his body taken to a local temple where it was cremated early Wednesday afternoon.

Duch, whose trial took place in 2009, was the first senior Khmer Rouge figure to face a United Nations-backed tribunal that had been assembled to deliver justice for the regime's brutal rule.

It is blamed for the deaths of 1.7 million people, nearly a quarter of Cambodia's population at the time.

In July 2010, the tribunal found him guilty of mass murder, torture and crimes against humanity at Tuol Sleng prison, a former Phnom Penh high school.

The site is now known as the Tuol Sleng Museum of Genocide, a memorial to the atrocities committed inside.

In 1975, Duch was installed as commander of the top-secret Tuol Sleng prison, code-named S-21. Duch was one of the few ex-Khmer Rouge who acknowledged even partial responsibility for his actions, and his trial included his own graphic testimony of how people were tortured at the prison.

The torture and executions that took place at Tuol Sleng were routinely recorded and photographed. When the Khmer Rouge were forced from power in 1979, the thousands of documents and film negatives left at the prison became proof of the regime's atrocities.

"I respectfully and strictly followed the orders," Duch said in one of his final public statements to the court.

Born in 1942, Duch was a maths teacher before he joined Pol Pot's movement in 1967, three years before the United States started carpet-bombing Cambodia to try to wipe out Northern Vietnamese troops and Viet Cong inside the border.

The former Khmer Rouge commander managed to disappear for almost two decades in north-western Cambodia, until a chance discovery by a British journalist in 1999, which led to his arrest on 10 May 1999.

Apart from Duch and Khieu Samphan, the only other top-ranking cadre to be jailed was "Brother Number Two" Nuon Chea, who died last year at the age of 93.

"I feel relieved that I have got some justice," said Norng Chan Phal, a 51-year-old survivor, who was incarcerated at S-21.

In the streets of Phnom-Penh, 25-year-old Chamroeun told Reuters that he did not know much about this period of Cambodia's history.

"People just don't want to think about bitter memories from the past, it's just old people who talk about their stories,” he said.