By Su Xinqi with AFP bureaus 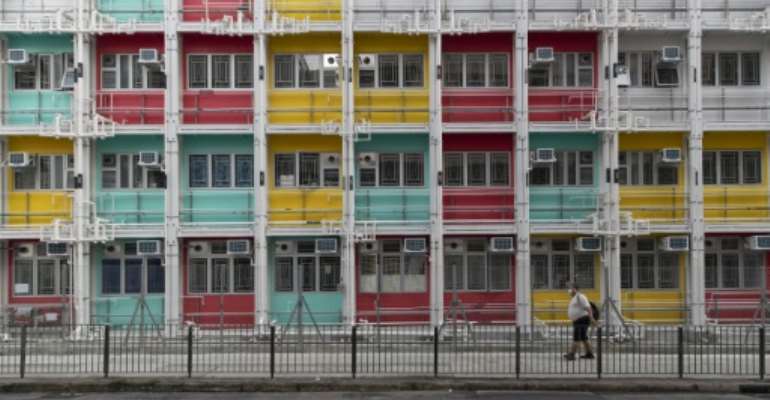 Despite its densely-packed population, Hong Kong has had relatively few coronavirus cases, with just over 4,800 infections. By May JAMES (May James/AFP/File)

Hong Kong began a mass coronavirus testing programme Tuesday overshadowed by fears that China is using the scheme to harvest DNA, while the number of infections in the United States surpassed six million.

The voluntary initiative in the southern Chinese city is offering free tests to millions of Hong Kongers as authorities worldwide continue efforts to stamp out an illness that has now killed almost 850,000 and infected over 25 million.

But it comes as populations are increasingly wary of coronavirus curbs and distrust grows in governments' handling of the pandemic, with protesters taking to the streets in a number of major cities in recent days.

German demonstrators against mask rules and other restrictions tried to storm parliament in the biggest of several European protests over the weekend.

Suspicions about government intentions have done much to undermine the testing programme in Hong Kong, where disillusionment with officials has been fuelled by China's crushing of the city's democracy movement.

German demonstrators against mask rules and other restrictions tried to storm parliament in the biggest of several European protests over the weekend. By John MACDOUGALL (AFP)

The scheme is part of an attempt to stamp out a third wave of infections in the densely populated finance hub that began in late June and saw the city reimpose economically painful social distancing measures.

But the programme has been hampered by a limited response due to the involvement of mainland Chinese testing firms and doctors -- and swirling public fears of the harvesting of data and DNA.

Since registration began on Saturday, 510,000 people have signed up to take the free tests. Health experts advising the government however have said as many as five million people might need to be tested for the scheme to end the current wave.

"I think it's a waste of time," local resident Emily Li told AFP. "The government can't convince me in terms of the effectiveness of the testing programme."

The World Health Organization on Monday urged governments to engage with people demonstrating against Covid-19 curbs and listen to their concerns, but stressed protesters needed to understand the virus was dangerous.

A commuter walks past the deserted Howrah Bridge during a day-long state-imposed lockdown as a preventive measure against the surge in Covid-19 cases in Kolkata, India. By Dibyangshu SARKAR (AFP)

"We should engage in an honest dialogue", but demonstrators have a responsibility to ensure protests are safe, he added.

"The virus is real. It is dangerous. It moves fast and it kills. We have to do everything to protect ourselves and to protect others."

Tedros took issue with the opinion that high death rates are not a major concern if it is mainly the elderly dying with the disease.

"Accepting someone to die because of age is moral bankruptcy at its highest, and we shouldn't allow our society to behave this way," he said.

A million new coronavirus infections have been detected globally roughly every four days since mid-July, according to an AFP tally compiled from official sources.

Cases and deaths per day in the United States and the seven-day rolling average. By (AFP)

In the United States, which accounts for a quarter of the global caseload, a million infections have been recorded in three weeks, taking the total to date across the six million mark.

India on Sunday set the record for the highest single-day rise in cases, with 78,761.

But there have been attempts to return to normality even as the virus continues to circulate, with French pupils back in classrooms Tuesday as schools across Europe open their doors again.

Students in Belgium return on Tuesday while in Greece classes are set to resume next Monday with a maximum of 25 children in each.

Youngsters in Germany went back last month and in England and Wales children are studying together again this week after a six-month closure.

But strict anti-virus rules are in place at many learning institutions as communities go to great lengths to avoid any return to painful lockdowns.

"The confinement period was hellish," said Florence, a 42-year-old mother-of-three in the southern French city of Nice.

"We will not go through it again, it's out of the question."

'Get rich quick' attitude among the youth eroding moral fabr...
28 minutes ago