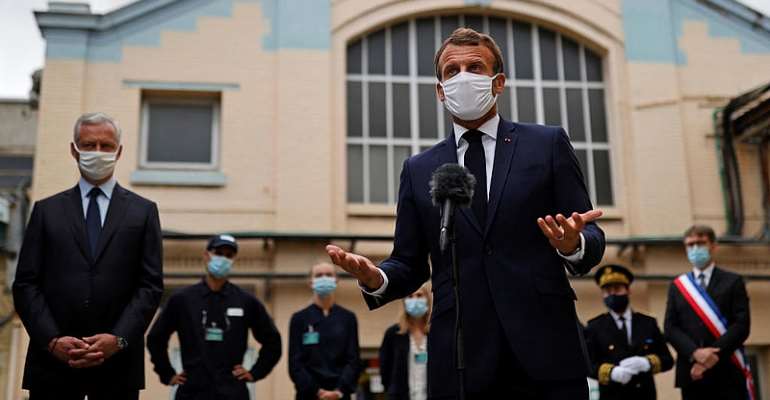 France will pour 15 billion euros into innovation and boosting its industrial sovereignty as part of efforts to repair the country's virus-stricken economy, President Emmanuel Macron announced Friday during a visit to a century-old pharmaceutical laboratory near Paris.

Speaking through a mask in line with strict new rules that came into force at 8am, Macron announced the news from a site owned by Seqens, France's largest producer of the active ingredients necessary for manufacturing pharmaceutical drugs.

His visit to the Villeneuve-la-Garenne plant, in the northern Paris suburbs hard hit by Covid-19, come ahead of next week's much-anticipated unveiling of a 100 billion euro economic recovery plan for France.

“The strategy we are about to launch is not about facing the difficulties of the moment, which we are already doing and will continue to do, but about preparing France for 2030,” Macron told journalists.

“We're not subsidising sectors in difficulty, we're investing in the future … health and industrial sovereignty will be one of the pillars of the recovery plan."

The Seqens factory, which produces around 15 active ingredients used throughout the world, has already been boosted by investment of 30 million euros. The Elysées Palace described the facility as ”the symbol of French industrial know-how in the field of pharmaceuticals”.

Friday's visit follows on from an earlier announcement Macron made in June from a Sanofi vaccine plant during which he made France's “health sovereignty” a priority - saying the Covid-19 crisis “has shown us that we must continue to produce in our country and on our continent”.

Responding to pushback by Parisians unhappy with the new mandatory mask-wearing rules, Macron defended the decision by police authorities as "reasonable constraints”, reminding the French the virus was now a part of their lives.

"Like you I don't like wearing a mask – it's awkward, it's painful," he said. "Barrier gestures are not natural, but we must accept them for a while."