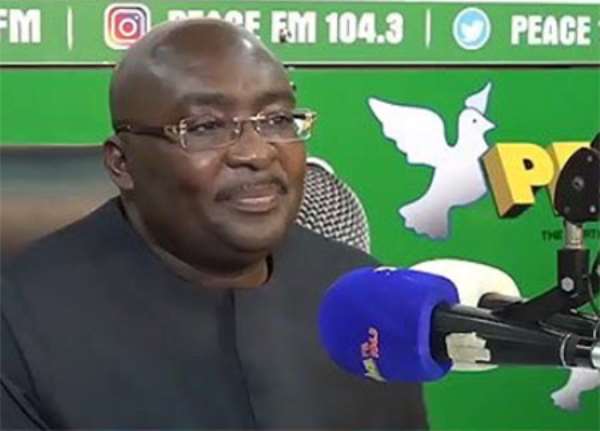 Vice President Alhaji Dr Mahamudu Bawumia has insisted that, in reality, most of the projects that the erstwhile Mahama government is boasting about do not exist.

Therefore, he has given the NDC members a two-week ultimatum to create a website similar to the 'Infrastructure Delivery Tracker' introduced by the New Patriotic Party (NPP) government, and publish all their projects when they were at the helm.

According to him, he doubts if they can create the website and publish their so-called projects for people to see since, to him, most of their projects are 'ghosts' projects only found in their propaganda Green Book.

“I bet you, the NDC cannot create such a website because most of the projects that the NDC claims to have constructed don't exist,” Dr Bawumia fired on 'Kokrokoo' on 'Peace FM' yesterday.

Speaking at length on various national issues during an interview with Kwame Sefa Kayi, the Vice-President descended heavily on the NDC for always taking delight to unjustifiably criticize the NPP administration.

He said the NDC members, as usual of them, tend to peddle falsehood about the NPP just for votes when elections are getting closer.

According to him, the era when they only resorted to criticizing government projects without any credible evidence should belong to history, insisting that they should be challenged to display their projects.

Dr Bawumia disclosed that the NPP administration had strategically introduced the 'Infrastructure Delivery Tracker' to mainly ensure accountability and transparency in the government sector regarding infrastructural projects.

“President Akufo-Addo is a servant leader and he wants the best for the country and that is why he has introduced the 'Infrastructure Delivery Tracker' to help promote transparency and accountability.

“He has introduced the 'Infrastructure Delivery Tracker' so that the citizenry can sit in the comfort of their homes and offices to check what the government has been able to produce in terms of infrastructure,” he pointed out.

Dr. Bawumia also said the NPP administration deserved applause for coming out with such a website, indicating that the tracker would prevent ghost government projects, moving forward.

He said the NPP administration had delivered 18,075 infrastructural projects so far, adding that attempts by the NDC to discredit the NPP projects would not materialize.

“We have delivered over 18,000 projects and the NDC so far is just questioning just 26 of them not to exist; even if it is true that the 26 don't exist, it shows that the NPP has done marvellously well in less than four years.

“The 26 infrastructural projects that the NDC has issues about are very small; it shows that we have delivered 99 per cent of the over 18,000 projects we have published on the website and that is fantastic,” Dr Bawumia stated.