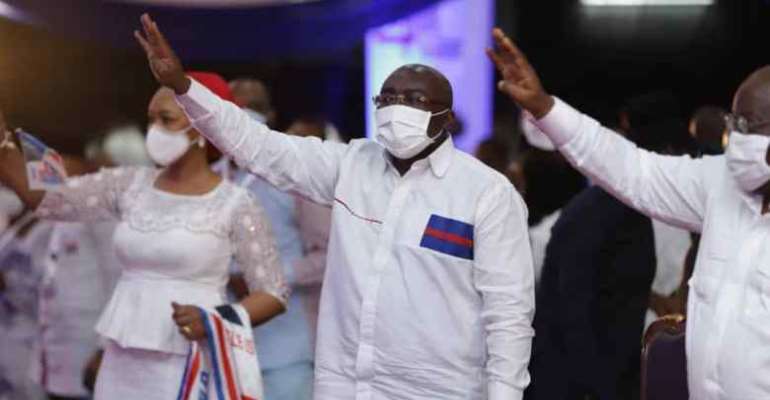 My all-time favourite novel is "Things Fall Apart" by Chinua Achebe, a Nigerian author. The principal character is Okonkwo, an Igbo leader and wrestling champion in the village of Umuofia. The book is a post colonial novel which demonstrates the influence of British colonialism and Christian missionaries on the Igbo community.

Much as I find the content of this book intriguing, what enthuses me most is its title, and this reminds me of the engagement of President Akufo-Addo and his Vice, Dr. Mahamudu Bawumia in a shameful competition of absurdity.

The President on Friday August 21, 2020, when being interviewed on ATL FM in Cape Coast, said that the idea of building an airport in Cape Coast will be subjected to a critical assessment before a decision can be arrived at.

". . . the response of the government should not just be that the people say we need an airport, the response should be that the matter has to be thoroughly examined and the need has to be established. That is the process the Ministry of Aviation has to go through," he said.

In less than 24 hours, Dr Bawumia speaking at the manifesto launch of the NPP at the University of Cape Coast on Saturday, August 22, embarrassingly contradicted President Akufo-Addo by saying that government will construct an airport in Cape Coast if the NPP government is given another four-year mandate in the upcoming December elections.

"We're going to build a new harbour and a new airport in Cape Coast. It is very critical that the Central Region gets its own airport," said Dr. Bawumia with confidence.

This preposterousness not only marred the NPP manifesto launch, but has shocked Ghanaians, and has even scandlised some leading members of the ruling party.

It's common for politicians to make all manner of promises on political platforms during electioneering. Such utterances by politicians make the electorate think that the politician is capable of doing everything. And I want to tell you a story.

Many years ago, one of Ghana's past military Heads of State was on a working tour to Kuntunase, a town which is more than 200 kilometres from the coast. There was a durbar of chiefs in honour of the Head of State. At a point, the leader of the nation asked the paramount chief of the area to name one very important need of his people. The paramount chief hesitated for a while, then one of his sub-chiefs whispered into his ears, "Nana, tell him we need a harbour!" So, the paramount chief requested for a harbour in an inland region!

The sub-chief who made the suggestion had visited his son in Tema, and had gotten excited about the beauty of the harbour, and thought it wouldn't be bad if they got one at their village.

Even though Akufo-Addo and Bawumia have made notoriously preposterous promises in the past close to the request of the paramount chief of Kuntunase, things are no longer getting funny. They are now crossing the line of absurdity into that of deliration, and I think they are now insulting the intelligence of the people of Ghana and God Himself. And I'll explain.

President Akufo-Addo during his campaign in 2016, made a pledge to God that if He helps him to win the 2016 presidential election, he will build Him a National Cathedral as a gesture of thanksgiving to God in his first term in office.

“Rather, and again like Solomon on that occasion, the building of the National Cathedral is to serve as a gesture of thanksgiving to God for his blessings, favour, grace and mercies on our nation, and to give me an opportunity to redeem a pledge I made to Him before I became President,” he said back in 2018.

A sod was cut at Ridge about two years ago to start the construction of the National Cathedral, but surprisingly, nothing else has been done since then, raising the question of the President's faithfulness to God. He has lied to the people of Ghana; must he lie to the Almighty God Himself? Are there consequences for failing to redeem a pledge made to God? Yes, there are: and I want us to look at what the Holy Bible says about this in Ecclesiastes 5:4 - 6.

"When you make a vow to God, do not delay in fulfilling it. He has no pleasure in fools; fulfill your vow. It is better not to vow than to make a vow and not fulfill it. Do not let your mouth lead you into sin. And do not protest to the temple messenger, 'My vow was a mistake.' Why should God be angry at what you say and destroy the works of your hands?

God among other things said in the above scripture that when you make a vow to Him do not delay in fulfilling it, and that He has no pleasure in fools! Oh, Baba God, I think your words are too strong. Please he is our president.

Now, the dangerous part of the afore stated quotation is that, God is asking why He shouldn't be angry with those who fail to honour their pledges to Him, and why He shouldn't destroy the works of their hands.

Giving all these, is there any wonder why President Akufo-Addo and his government have become an eyesore? Do we need a prophet to tell us that God is against the second term of President Akufo-Addo because of his unfaithfulness to Him and the people of Ghana? Why should God give him another term when the vow he made for his first term has not been fulfilled? There's nothing prophetic than the Word of God. Must we, therefore, worry ourselves with prophecies about who is going to win election 2020?

The worst is yet to come --- the bad news is that there are going to be many worse troubles, confusions and scandals from the camp of President Akufo-Addo from now till December 7; and the Cape Coast Airport ignominious act caused Ghanaians by our President and his Vice is just a little sign of God's anger.