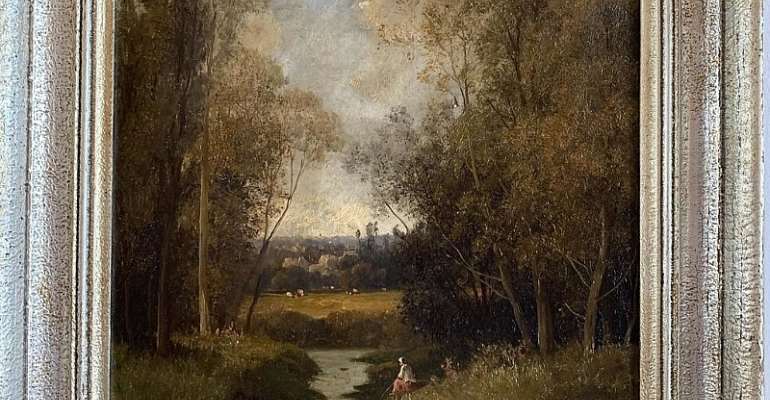 A painting by the 19th century French artist Nicolas Rousseau, stolen by a German soldier during the second world war, has been returned to France and has gone on display at the Centre for Peace in Verdun.

The small landscape by the student of the Barbizon school had been hanging in the Forner family living room in Berlin for 75 years.

Alfred Forner, an officer in the German Luftwaffe who was stationed in Pas-de-Calais during World War Two, was tasked by a superior to take the painting to an address in Berlin during a leave of absence in 1944.

Upon arrival, he found the building had been destroyed, so he decided to keep the painting in his home. He died a few months later and the painting remained intact.

His son, Peter, decided to return it to its country of origin and contacted the French embassy in Berlin to do so in January 2019.

Original owners unknown
After an investigation carried out by the French ministry of culture and the commission in charge of compensation for victims of war theft in Berlin (CIVS), the painting arrived back in France in August 2020.

Philippe Hansch, the director of the Centre for Peace in Verdun, says he hopes the public will come forward with information related to the original owners, who have not yet been identified.

"It's an example of the French school, a bucolic landscape with a fisherman in the foreground and a village in the distance," he told RFI.

Hansch said that he went to Berlin in a car at the beginning of August to fetch the work, which, with an estimated price of around 3,500 euros, has more of a historical value than a monetary one.

Testament to Franco-German friendship
The painting is an excellent symbol of the franco-german friendship, he says, and can act as a bridge between the past and the present.

"It's a slightly different way of presenting the second world war," Hansch added. "It could prompt high school students to stop and ask questions about this period of the war, which is slipping away from us but still an essential part of understanding the world today."

He said that Peter Forner, who died at the age of 80 last year, had expressed hope the artwork would be one day returned to its rightful owners.

"It's a difficult case, because the painting doesn't have enormous value, so it's not necessarily in catalogues," explained Julien Acquatella, from CIVS, in Berlin.