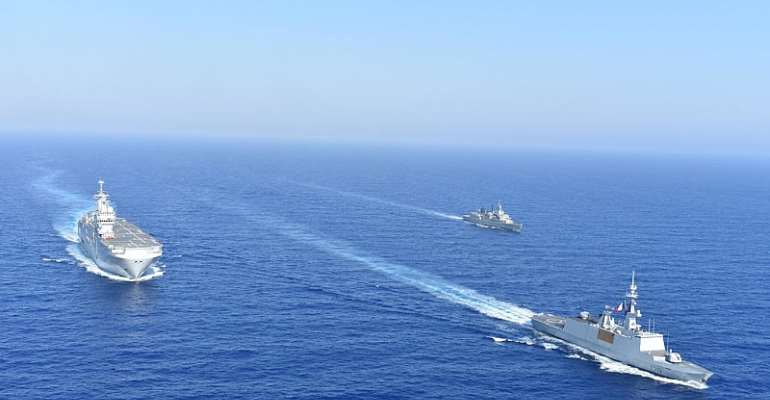 via REUTERS - GREEK MINISTRY OF DEFENCE

France has deployed two Rafale fighter jets and navy ships to join Greek naval patrols in the Eastern Mediterranean, where a disagreement over exploration rights of new energy reserves has Greece and Turkey locked in a maritime dispute.

President Emmanuel Macron ordered the deployment of two Rafale fighter jets and two navy vessels to the Eastern Mediterranean on Thursday to provide support for Greek naval patrols, amid rising tensions with Turkey.

The ships and jets arrived in Crete and carried out joint manoeuvres with Greek forces, acording to Greek defence sources.

Thursday's exercise came after the French president vowed to temporarily boost France's military presence in the Eastern Mediterranean, saying he was "concerned" by Turkey's "unilateral" exploration of the disputed waters.

Describing the situation "worrying", Macron called on Turkey to halt oil and gas exploration in a disputed area of the Mediterranean south of Crete.

Greece and Turkey have competing claims to natural gas reserves in the area.

"The unilateral decisions of Turkey (...) must cease in order to allow a peaceful dialogue" between the Nato allies, Macron tweeted.

Since Monday, a Turkish seismic vessel, the Oruc Reis, has been sailing between Crete and Cyprus to conduct research for potential hydrocarbon exploration.

Who's sea is it?
President Recep Tayyip Erdogan has said collecting seismic data is necessary before selling to potential bidders.

The search for potentially rich oil and gas deposits is taking place south of the Greek island of Kastellorizo (Meis in Turkish).

Athens views the Oruc Reis's mission as a deliberate and unprecedented attempt to undermine the country's sovereignty.

However, Greece's recent decision to sign a maritime deal with Egypt designating an exclusive economic zone between the two nations for oil and gas drilling rights has angered Ankara, which claims Athens is the one violating its sovereign rights.

Libya conflict
The Greek-Egyptian deal is in response to a similar agreement between Turkey and Libya's Tripoli-based government last year that Egypt, Cyprus and Greece say is an infringement on their economic rights in the oil-rich sea.

Relations between Paris and Ankara have also been strained over the conflict in Tripoli.

Last month, France pulled out of a Nato naval mission in the Mediterranean, accusing Ankara of blocking an inspection of one of its ships suspected of smuggling arms to Libya, in violation of a UN arms embargo.