By Heather Scott with AFP Bureaus 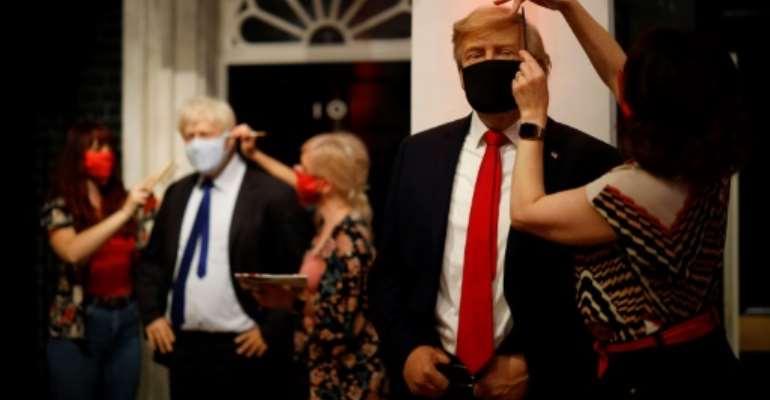 Artists at London's Madame Tussauds check the masks on the wax figures of British PM Boris Johnson and US President Donald Trump. By Tolga Akmen (AFP)

The scale of economic devastation from the pandemic was laid bare on Thursday as Western economies recorded historic slumps, just as resurgent caseloads forced many countries into agonising new trade-offs between health and financial stability.

Six months after the World Health Organization declared a global emergency, the novel coronavirus has infected more than 17 million people across the globe.

The WHO warned Thursday that young people are "not invincible" and were helping to drive resurgences in many places that had largely curbed the disease.

"Spikes of cases in some countries are being driven in part by younger people letting down their guard during the northern hemisphere summer," said WHO chief Tedros Adhanom Ghebreyesus.

COVID-19 has killed more than 667,000 people, and is forcing governments into a persistent balancing act between saving lives and preventing economic devastation.

VW was one of the global companies reporting the impact of the pandemic on its results. By Hendrik Schmidt (POOL/AFP/File)

Nowhere is that challenge more evident than the world's hardest-hit nation -- also the world's biggest economy -- with the United States posting a second-quarter loss of 9.5 percent compared with the same period a year ago, the worst figure on record.

If that trajectory carried through the entire year, its economy would collapse by nearly a third (32.9 percent), the data showed.

With travel down to a trickle, aerospace giant Airbus said it burned through more than 12 billion euros in cash in the first half of the year, with a net loss of 1.9 billion euros ($1.4 billion) and plans to cut production by 40 percent.

Global daily cases are now approaching the 300,000 mark, with the curve showing no sign of flattening -- it took just 100 hours for one million new cases to be recorded.

World toll of coronavirus infections and deaths. By (AFP)

In Japan, Tokyo's governor called for restaurants, bars and karaoke parlours to shut earlier as the Japanese capital reported a record number of new infections.

"The current situation is more serious than before," said Yuriko Koike. "There were several clusters in Tokyo.... We have no time to waste."

Sweden, whose controversial softer approach to curbing coronavirus has received worldwide attention, said it would encourage people to keep working from home into next year where possible, as the country passed 80,000 recorded cases.

Two island countries that were early poster boys for containing the virus offered warnings against complacency on Thursday.

In Australia, there were 723 positive tests in the southeastern state of Victoria alone, well beyond the previous nationwide record of 549 cases set on Monday.

And Iceland recorded its first hospitalisation since mid-May, as well as 31 new cases, forcing the government to reimpose social distancing and masks, and limit the size of gatherings to 100.

Australia is struggling with a surge in cases. By PETER PARKS (AFP)

Hong Kong, which was also initially lauded for its coronavirus response, is struggling to balance fears of a third wave among its 7.5 million residents, which authorities fear could cripple the healthcare system, against anger at new restrictions.

Just a day after restaurants were banned from serving customers indoors, the decision was reversed following a torrent of online criticism over images of mostly blue-collar workers forced to eat on pavements and in parks -- and even inside public toilets to escape a torrential downpour.

South Africa faces a similar dilemma and pushed back its nighttime curfew by an hour to 10 pm to help the devastated restaurant sector, despite a recent surge in cases.

Ivory Coast however bucked the trend, announcing that bars, nightclubs and cinemas would reopen on Friday.

US travellers remain barred from the EU after the latest fortnightly update to its list of safe countries. Algeria was removed after a spike in cases.

A man sits on a park bench partially cordoned off to enforce social distancing in Hong Kong. By Anthony WALLACE (AFP)

Several European countries have slapped restrictions on travel to and from Spain.

UK Prime Minister Boris Johnson, fresh from announcing quarantine for travellers returning from Spain, suggested the rest of Europe could be facing a second wave -- despite his own country's dismal figures.

France's health minister has hit back on saying that was categorically not the case in his country. However the number of patients in intensive care in France rose on Thursday for the first time since early April.

Spain, one of the countries hit hardest by the pandemic, repeated again on Thursday that it was experiencing a second wave, criticising Britain's blanket quarantine, which includes islands without significant outbreaks.

‘Sputnik-V procurement contract must be re-examined’ – Kwaku...
31 minutes ago

Getting Sputnik-V vaccines from black market using middlemen...
31 minutes ago