On The Kafaba Witch Lynching 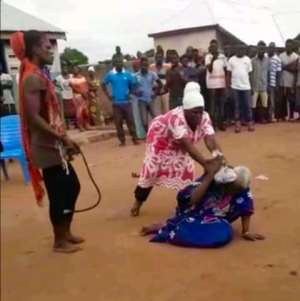 I neither have the heart nor the courage to watch the video of the 90-year-old woman being lynched upon the accusation that she was a witch. If I were to watch, that dastardly act could haunt me for years. And so I am protecting myself against grief and sorrow. Call me weak...

But if one believes in witchcraft, one is capable of the lynching that occurred in Kafaba. The belief in witchcraft is what made the people savage enough to beat up a 90-year-old woman to death. Because if one believes that someone else is a witch, then it follows that somebody else could be blamed for someone else’s misfortune. And that will lead to that person being a target for some terrible punishment. The belief in witchcraft therefore undergirds the harm often perpetrated against vulnerable citizens, whether tangible or intangible. And because the notion is false, government must act to purge it from the society.

Again, the real problem is in the very belief in witchcraft itself. That belief does not exist in a vacuum; neither is it abstract. If people believe that there are witches in our midst, they will project their belief onto others and cause considerable harm to those they regard as witches. Their actions may just lie on a continuum of harm, beginning from prayer warfare, to innuendos, to insults, to neglect, to physical abuse and finally to lynching. Once you believe in witchcraft, somebody will be a target of the belief, and you will act on your belief to inflict harm upon somebody.

The difference between you and the culprits of Kafaba is in the open savagery against their victim. Your action might be more subtle and latent, albeit equally vicious or injurious.

In Ghana, a substantial section of the population believes strongly in witchcraft, making it possible for the people to inflict harm on someone else for being a witch. Meanwhile, the notion itself has never been defined or even identified. To wit, nobody knows exactly what witchcraft is or what witches do. Witchcraft could mean everything and nothing at the same time. It could mean somebody flying on a broomstick or flying like a ball of fire or just being a little more naughty or having too much prescience to predict misfortune or just being too old or simply being a maid servant or being mad. The general rule is that once you are weak or sick or vulnerable or poor, you are eligible to be a witch. The powerful and strong are often exempted from this accusation.

And of the selection of the citizens to be branded as witches, the churches are generally responsible. The people are confronted and accused and declared as witches in the churches, whereupon they are made to undergo humiliation and so-called deliverance. During these sessions, they are made to vomit frogs and lizards or cockroaches. They are also sometimes made to shriek and scream and shake and roll on the floor or beaten or simply kicked around. At the extreme end, they are killed.

These churches learned all their tricks from the traditional priests who have now given up their franchise to them. In the past, as in the present, the fetish priests exacted forced confessions from these witches, extorted huge fees from them and finally poisoned them. Same applies to the churches nowadays. The pastors and prophets exact forced confessions from witches, charge them heavy fees and maim or torture or kill them.

And if you think that our education and travel or cultural exposure wean anyone from their belief in witchcraft, you ain’t seen nothing yet. The more the Ghanaian gets education and exposure, the more he or she gets entrenched in the belief in witchcraft. Because with complex life comes the need for more protection from the witches and hence over-reliance on the men of god who select the witches in our family. If a person’s life is basic, s/he cannot fall from the floor and accuse anyone of being responsible for his or her downfall.

One time, a Ghanaian friend came to my office in Austin. While engaged in his legal matter, a call came to him from Ghana, whereupon he became crestfallen. The caller was narrating to this person how his mother had been caught in witchcraft. Extensive and expensive discussions followed as to how to cast out her evil spirits. So our level of education and exposure has nothing to do with any cure against superstition. More likely than not, our education and exposure rather promote superstition. This is because superstition is also an attractive part of our self-righteousness. The more we believe in this mumbo jumbo, the more devout we are considered as Christians. Remember the mantra that we are fighting against principalities and powers of darkness? Those principalities and powers are peremptorily interpreted to mean witches, although the Bible has no such interpretation anywhere else. Our notions of witches do not exist either in the Bible or any religious book anywhere; nonetheless, the people believe what they believe!

And the power of the church itself might be quantified in its ability to capture witches and cast out demons. This kind of vaunted power is traceable to the medieval churches which rampantly burned witches at the stake. One of the ways in which the so-called spiritual churches attracted large following from the orthodox churches is that the former could capture witches and cast out demons, whereas the latter is much more coy in this practice. How can you claim to be a powerful priest or prophet if you are not exposing and casting out witches and demons? The spectacles appertaining to the witch-hunt pull the crowd to the churches!

All those of us condemning the lynching of the 90-year-old woman from Kafaba are guilty, insofar as we believe in witchcraft. In our hearts of hearts, we believe in witches and also believe that somebody in our family is a witch. More likely than not, that person is an old woman or aunt or maid servant or simply crazy or poor. And we have been punishing all these people….by hating them, starving them, insulting them, beating them, neglecting them or simply abandoning them in their times of needs. We are always performing the kinds of acts that will speed up their demise. And just because we have yet not lynched them does not mean we are any better than those who killed the old woman of Kafaba. Just as the old woman’s son frankly stated in an interview, if he believed her mother was a witch, he would have killed her himself. By this statement, he exculpated all those that killed the mother because they sincerely believed that she was a witch and therefore killed her!

And what did the mother herself teach him anyway? That witchcraft is real? And that others are witches but she was not a witch? There is your slippery slope of the belief in witchcraft; Whatever goes around comes around!

That kind of jaundiced illogic and irrationality inhabits the mind of every Ghanaian and makes each person a potential killer. At the minimum, they inflict all the harm they can muster on account of their belief in witchcraft without patently infracting on the law.

And so what is our education all about? If it cannot expunge superstition and bunkum from our minds, and if it will allow religion and culture to supplant our knowledge and learning, why are we still going to school?

And I ask these questions because no matter how many times we condemn the lynching of the 90-year-old woman of Kafaba, we have done nothing to solve any problem in this country. Many have indeed died more horrible deaths because of all these claims of witchcraft. Mothers, sisters, grandmothers, maids, servants, aunts, nieces and mentally afflicted persons have died in their numbers or been beaten or poisoned or ritually murdered simply on the claim that they were witches. This belief has destroyed a lot of families in Ghana and accounts for most of our domestic violence. And unless this superstition is simply expiated from our society through vigorous education, we are joking if we think any impact will be made in our society.

No witches exist anywhere, and so wherever that word is mentioned, fraudulence is being purveyed, and crimes are being committed. If crimes are being committed and fraudulence is being purveyed, there is a compelling reason for the government to step in. The word itself should be banned from the society altogether, and those who utter it and apply it to other citizens should be severely punished. If our cultural and religious practices promote false claims of witchcraft, they too ought to be abolished. The educational curriculum ought to jettison all aspects of teaching that promote or even tolerate this false belief; we have to promote the type of learning that will explain causes and effects of our actions, respect for the old, the weak and the vulnerable, and scientific and rational explanation of natural phenomena.

We must totally abolish any belief and reference to witchcraft in the society, and hold accountable and criminally or civilly liable anybody that makes any accusation of witchcraft against anybody: That accusation should constitute a crime per se.

We must also institute public education against the notion and abolish its use in our vocabulary. For unless we make these efforts, whatever condemnation we proclaim against the killing of the old woman of Kafaba will be in vain.