By Susan NJANJI
Listen to article

Undertakers clad in canary-yellow protective suits lowered the coffin into the cold soil as a mechanical digger waited nearby to smother the grave.

Still numbed by their loss, a family watched the desolate spectacle from metres (yards) away.

They were barred from tossing a handful of soil or a flower into the grave, and could not even huddle together.

Modise Motlhabane was still in his early 40s when he became the latest of South Africa's mounting fatalities from coronavirus.

The ceremony to bid him farewell at Johannesburg's Westpark cemetery lasted less than 30 minutes: these days, funerals are fast-tracked.

Under new regulations, mourners have a maximum of two hours to collect the body and bury it to avoid congestion at graveyards and limit the spread of COVID-19.

The change has been deeply traumatic in South Africa, where family honour, dignity and the instinct to renew human bonds make funerals long and elaborate affairs. 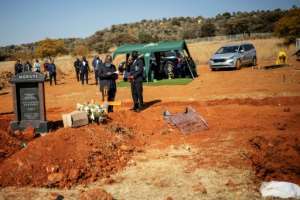 Farewell: A pastor reads a passage from the Bible at the funeral of coronavirus victim Modise Motlhabane as mourners stand at a distance. By Michele Spatari (AFP)

The time between death and burial is traditionally a week or more, so that mourners can travel from different parts of the country or from abroad, to come and collectively grieve.

Today, the remains of a coronavirus victim are interred within three days -- and disposal is swift, clinical and mindful of social distancing.

"It was too quick," said Charles Motlhabane, 32, after the burial of his older brother.

Organising the funeral was "a nightmare," he said.

"We're used to having like a whole week of preparations and calling family members.

"But now things are different -- you can't even get close to the casket to view it going down. So it's a mess, this thing, it's just a huge mess."

On the way to the cemetery, the hearse drove briefly by the family home in Soweto.

It parked on a narrow street while mourners gathered from metres away, and a priest shouted out a prayer. The vigil lasted just 10 minutes before the hearse moved on.

South Africa is the worst-affected country in Africa and among the top five in the world in terms of confirmed cases, with more than 400,000 infections reported to date.

It is now in the midst of the long-forecast coronavirus "storm". 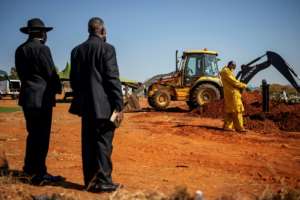 A relative and a pastor stand by as a mechanical digger moves in to cover the grave. By Michele Spatari (AFP)

On Wednesday the virus death toll jumped by a record 572 over the previous 24 hours, taking the total of fatalities to 5,940.

But experts suggest this could be an understatement.

Police have been deployed at the entrance of cemeteries to ensure an orderly traffic flow and control the numbers of mourners entering, and funeral parlours say they are nearly bursting at the seams.

At AVBOB Funeral Service in Soweto, branch manager Gladwin Madlala was busy attending to a handful of mourners that had come to view a body.

"Normally this time (of the year) we are having plus or minus 16 to 18 bodies in the fridge. But currently we are sitting with more than 30," he said.

"At some point about a week ago, we were sitting at our full capacity, which is 44 bodies in the fridge. In fact it has doubled."

Johannesburg, currently the virus epicentre in South Africa, has a capacity to bury around a million people.

Reggie Moloi, the City of Johannesburg's cemeteries manager, told AFP that COVID-19 deaths for the whole of the month of April tallied six.

In the first three weeks of July alone, they were 252.

"Our curve really went up," he said. 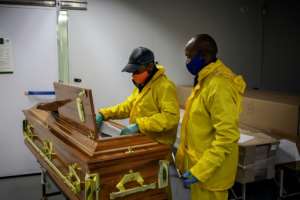 "People's grieving could be complicated by the inability to do a grand and beautiful send off, (and) that could come with feelings of guilt that my loved one deserved more than this," Mvakali said.

Final rites are "all about reaching closure," which includes details such as flowers and personal mementoes, she said.

The business of death will have a bumper year.

"The surge is upon us," Health Minister Zweli Mkhize said on Thursday in badly-hit Eastern Cape province. "This month, numbers have increased and next month we expect the numbers to be higher as well."