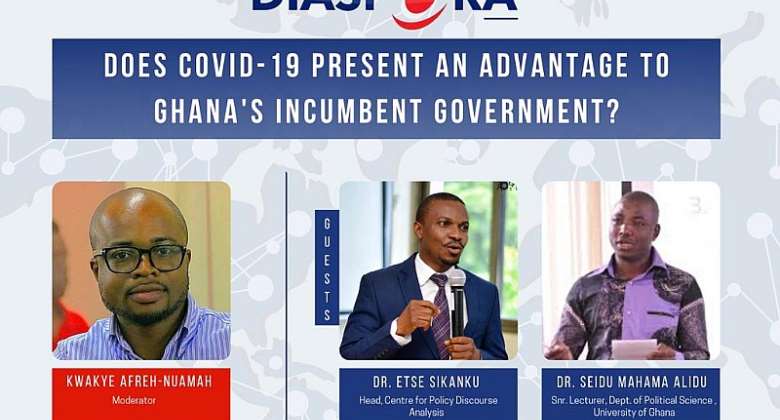 A political science lecturer at the University of Ghana, Dr. Alidu Seidu has opined that COVID-19 has put the NPP government in a politically advantageous position, placing it steps ahead of its main opponent, the NDC.

Dr. Seidu was speaking to Kwakye Afreh-Nuamah, on the maiden edition of ‘From The Diaspora’, a weekly YouTube programme recorded in England, United Kingdom. The political analyst is of the view that opposition parties in Ghana have been “muscled into a corner,” a reason John Mahama has had to also intensify his social media briefings.

Dr. Seidu further asserted, the idea of exempting government officials from the lockdown rules created an opportunity for subtle political campaigning, “If the president can move easily to wherever he wants to go without restrictions, that same ease of movement is not applied to any other candidate.”

Also contributing on the show, Head of the Centre for Policy Discourse Analysis and lecturer at the Ghana Institute of Journalism, Dr. Este Sikanku felt government is taking political advantage of the situation.

“If I do my audience analysis, I can arrive at that conclusion that, one of the major themes of conversation has been the concern that the President has engaged in politicking…,” he said.

From The Diaspora is a current affairs programme focusing on Politics and Corruption; Education; Crime and Security; Health, Gender and Developmental issues on the African continent.

This is where ‘From the Diaspora’ comes in. This show is designed to highlight topical issues of national importance and hear the informed views of Ghanaians and Africans abroad on same.