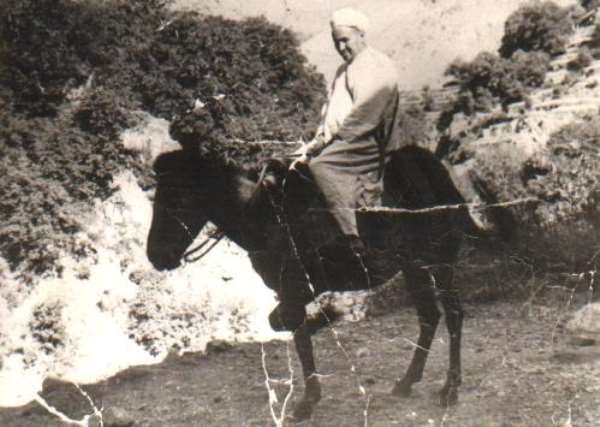 Recently, I had a moment of self-reflection brought about by the passing of someone who made a difference in the trajectory of my life. Years ago, I lived in the home of Omar Himmi Ait Omrar in the village of Amsouzerte in the High Atlas Mountains of Morocco. Sharing stories about those two years (1993-1995) living in Omar’s home and what followed, those stories of life, maybe meaningful to others.

In the early 1990s, getting to this very distant village, caught between the provinces of Ouarzazate, Taroudant, and Al Haouz, was difficult. Of the five valleys surrounding Toubkal mountain, the tallest peak in North Africa, only one is on its south side: the Tifnoute. What is special about that fact is that about half of the Toubkal National Park is the summer pasturelands for the Tifnoute people’s herds.

Yet, until that time there had not been adequate communication between the park management and the Tifnoute community of 44 villages (about 12,000 people) because it is so remote that it takes 24 hours to get there due to having to circle around the Atlas Mountains in order to arrive, with the last 70 kilometers of which being unpaved paths. When, as Peace Corps Volunteers, we were assigned to the Toubkal park, we could choose to live anywhere among its valleys of villages, so when I heard that no one had gone to the Tifnoute, I said, “OK, I’ll do it, I’ll go.” I traveled in segments, and it took me three days to get there that winter in 1993.

When people arrive in the Tifnoute, they would always be sent to Omar Himmi. No one knew I was coming, and there I was planning to stay for two years. I remember that the first meal I ate was an omelet, after which I immediately felt tired and sick from the long, cold journey. I was ill for two weeks, unable to leave my room and having terrifying hallucinations, which I had never had in my life.

I decided early to watch the menacing shapes in my mind like a spectator would a movie, and I even ended up missing them once they were gone. At night, I would feel Omar Himmi’s hand on my head because he was genuinely worried. He would make sure I had hot soup and also tangerines for Vitamin C, which thankfully were in season in Morocco.

After a few days, the local sheikh came to visit me, and I mustered enough energy to sit up, show my passport, and ask whether the people would be happy if an American lived among them for two years, to which he replied, “Yes.” That was all. But it became more complicated because the Caid did not feel the same way. At that time, community empowerment and participatory development were words that no one had heard of, and these ideas of organized change were not particularly trusted - and to think their implementation is now mandated in Morocco. That the Caid did not want an unexpected sojourner to live in the Tifnoute, yet that someone was sick and confined to bed (or rather the covered floor), presented a dilemma for Omar.

As I was still weak, Omar convinced me to go to a hospital, which was in Taroudant. I was not getting better, and I was not really walking, nor did I have energy. I reluctantly agreed. But, when I arrived at the transit, I saw that all of my luggage was packed in the back of it. I knew that if I got in, it would be hard for me to come back. So, I refused. I turned around and went back to Omar’s home. When I passed him on my way to my room, his face was like a stone because he knew that his way out of the conflicting situation had not been successful. But he accepted me.

That was our beginning. Very soon after that, we worked out an arrangement where I lived there and had breakfast and dinner with him. In this way, he had the biggest influence on my personal life during those years because he agreed to do that even though, at times, he was made to feel he ought not to.

Another story I recall, somewhat indicative of the times we lived in almost thirty years ago, occurred one night at dinner. It was always just me and him, in his 70s at the time, a grandfather who later became a great-grandfather and lived to the age of 103. One night, Omar and I were talking about the Tifnoute people, and we ended up talking about the sheikh, Haj Lehcen Ait Ouahman, a complicated and quite a thoughtful man, I would later learn. I asked Omar if he was friends with the sheikh, and he said to me, “Before he became sheikh, we were great friends!” And he laughed, which made me laugh. We laughed so hard that we cried.

The next day, I went down to the village store, the owner of which was a close friend of Omar, who was also there when I entered. I walked in on Omar relating the story of the previous night’s happy tears. When he got to the point where he had to refer to me, he did not want to call me “aghmoy”--the Tashelheit word for a foreigner or outsider--because it might have been considered a bit insensitive. Instead, he asked me my name.

So, I had been living in his home for some months at that point, having breakfast and dinner with him every day, sitting together from about 4:00 in the afternoon when the sun went down behind the mountain and talking, and he did not know my name! You can think about that in multiple ways, but can you imagine? We would talk about personal experiences: Omar told about when the Jewish people lived there when his brother was Sheikh and had a Jewish advisor.

Every day, we would be talking and sharing, and there is a warmth to the fact that this went on without him knowing my name. There was a trust there to receive me in this way without asking to see my passport, without any formal contract, without concern for whether I would pay him on time or be able to be found. He really was just accepting and gave unconditional hospitality. That is how I came to feel about the relationship and what I learned in those early years here in Morocco.

Omar’s older brother Mohammed, the sheikh (which is what bestows upon the family the title, Ait Omrar), had passed away in 1951 from poisoning. Can you imagine drinking a cup of coffee that has such destructive sickliness that it turns your kidney into a liquid that you then regurgitate? It makes me realize the nature of the poison.

Sheikh Mohammed Himmi in the Tifnoute Valley, circa 1950 (photographer unknown).

People can quarrel, but we draw a line at poison because of the hiddenness of it--not just the treachery but the cowardly deceit of it. Why was he poisoned? Because, according to Omar, he would not permit the local men to marry more than one woman. Around that time, he visited a village below Amsouzerte, had this cup of poisoned coffee, returned home, and lived only two more days.

The day after his return, he asked Omar, “At what point is the sun?” Omar told him where it was. Gesturing, Mohammed said, “When it gets to [this point], I will be passed.”

I was greatly influenced by the ongoing conversations with Omar of all the stories and deeds and attitudes that he could remember about his brother and the people. As an example, one that has stuck with me all these years and was even part of my master’s thesis focus is the issue of water supply in that region. There is a water spring source there called Ouray that flows north instead of south, but it belongs to the southern Tifnoute community.

They had been working on a project, digging into the mountain to reverse the direction of the water flow that would have changed the life course of fourteen villages, several thousands of people and their generations that followed. The project was stopped upon Sheikh Mohammed’s death all those years ago, and, to this day, they are still suffering without adequate water, having to pipe an insufficient amount from eight kilometers away rather than having their own source--an unsustainable remedy.

Ouray became a project that I really wanted to work on during my service, still want to do, and for which I continue to advocate. Living in Tifnoute, I would go into my room after these conversations with Omar, and I would write these stories in my journal. The stories of the past, like Ouray’s, were brought alive again in the present as I tried to make good on the necessary work that was started many decades prior.

After the two years, when I was soon to leave, Omar brought to me the small tea kettle of silver that Sheikh Mohammed would drink tea from with his wife. Only the two of them would drink tea from that kettle--a family heirloom, a regional heirloom--and he gave it to me. This was a hugely thoughtful gift. I brought that tea kettle with me when I returned to New York. I showed it to my family, and I said, “This is the tea kettle of Sheikh Mohammed, and he would drink tea from it only with his wife.” I explained to them that he tried to do the right things, and he was murdered for it, that he was inclusive, and that the kettle was approaching a century old.

To others, it was only an old, unpolished kettle from the mountains that they had little affinity for, and they seemed not particularly moved by the story. It became clear that that kettle was in entirely the wrong place. Its meaning lay in Toubkal. So, though it took some time, after a few years I returned to Omar, and I brought back the kettle. I said, “Omar, this kettle belongs here.” And fixing a wordless look on me, he understood, and he accepted it.

Jumping to the end, our last conversation, a few days before he passed away in May 2020, he could no longer speak. He could whisper to his grandson, Mohammed, who related to me what Omar said. I would respond to Mohammed, who would convey my comments to his grandfather. The very last thing he said to me was, “This is your home,” meaning his home was a place I was always welcome to be. And, from time to time, over the course of thirty years, it has been a place where I have found myself. There was something there, whenever I was there, that was soothing as nowhere else.

Omar Himmi Ait Omrar of Toubkal in 2017, holding a picture of himself with the author celebrating Eid al-Adha together in 1994 (photo by Hassan Ait Ouatouch).

Dr. Yossef Ben-Meir is a sociologist and President of the High Atlas Foundation, a not-for-profit organization dedicated to sustainable development in Morocco.

Covid-19: Hassan Ayariga under life support after ridiculing...
1 minute ago

What evil men mean for wickedness God turns it around for go...
16 minutes ago