I'm sorry but no regrets - Zidane 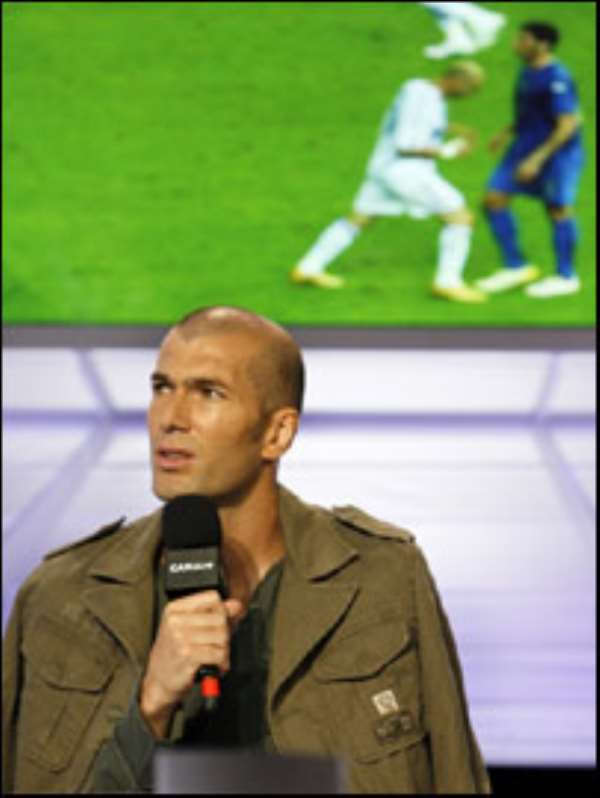 Zinedine Zidane has apologised for his headbutt on Italian defender Marco Materazzi in Sunday's World Cup final.
But the French legend does not regret his actions, alleging on television that Materazzi provoked him by insulting both his mother and sister.

"It was inexcusable. I apologise," said the 34-year-old Zidane. "But I can't regret what I did because it would mean that he was right to say all that."

Materazzi responded by denying he said anything about Zidane's mother.

"I didn't mention anything about religion, politics or racism," said the Italian on Wednesday.

"I didn't insult his mother. I lost my mother when I was 15 years old and still get emotional when I talk about it.

"Naturally, I didn't know that his mother was in hospital but I wish her all the best.

"Zidane is my hero and I have always admired him a lot."

Zidane was sent off for headbutting Materazzi in the chest in the second period of extra-time in the final in Berlin.

The Frenchman claimed he had been provoked by the Italian and appeared on French TV station Canal Plus on Wednesday to explain his actions.

Zidane explains: Read a transcript of the interview
"It was seen by two or three billion people on television and millions and millions of children were watching," he said.

"It was an inexcusable gesture and to them, and the people in education whose job it is to show children what they should and shouldn't do, I want to apologise."

Asked what had caused to react so violently, he said Materazzi had directed some "very hard words" at him.

"You hear them once and you try to move away. But then you hear them twice, and then a third time," said Zidane.

"I am a man and some words are harder to hear than actions. I would rather have taken a blow to the face than hear that."

Zidane, who retired from football after Sunday's final, also called for Materazzi to be punished for his part in the incident.

"We always talk about the reaction, and obviously it must be punished. But if there is no provocation, there is no need to react," said the former Real Madrid and Juventus player.

"Above all it was a very serious provocation. It was an inexcusable gesture but the real culprit is the person who provoked it.

"Do you imagine that in a World Cup final like that with just 10 minutes to go to the end of my career, I am going to do something like that because it gives me pleasure?"

Since the incident, rumours have run rife about what Materazzi said to get such a reaction from the Frenchman.

There were claims the Italian had called Zidane a "terrorist", but in Tuesday's edition of the Italian newspaper La Gazetta dello Sport, Materazzi said: "It was the kind of insult you will hear dozens of times and just slips out on the field.

"I didn't call Zidane a terrorist and certainly didn't mention his mother. I did not bring up Zidane's mother; for me a mother is sacred."

Zidane, who was born and grew up in Marseille, is the son of Algerian immigrants and has suffered taunts about his heritage throughout his football career.

The two players initially clashed in the Italian penalty area before words were exchanged.

Materazzi said: "I held his shirt, for only a few seconds. He turned towards me and scoffed at me, looking at me with super arrogance, up and down.

"He said 'if you really want my shirt, you can have it later'. It's true, I shot back with an insult."

Fifa is to investigate Zidane's sending-off and president Sepp Blatter has hinted the France star could be stripped of the Golden Ball award he won after being voted the best player in the World Cup by journalists.

Zidane said he planned to defend himself in the Fifa investigation into his sending off.

He also confirmed that he would not go back on his decision to quit the game.

"This is a decision I have made and I will not go back on it," he said. "This is definite. I will not play again."