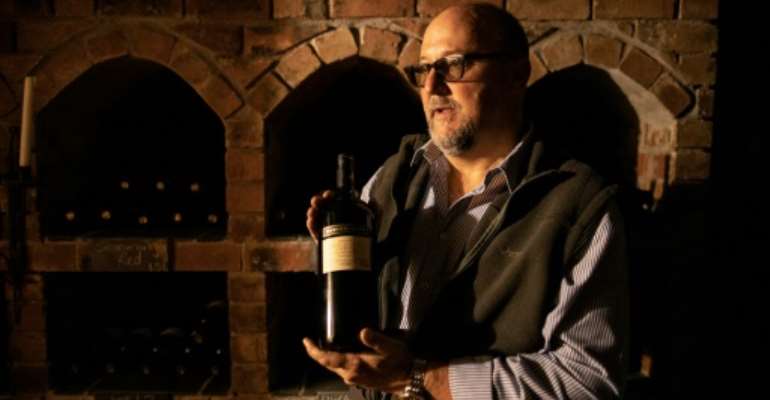 South African winemakers are no longer sure they have an export market. By MARCO LONGARI (AFP)

Wineries around Cape Town fear a nine-week alcohol sales ban will leave a bad hangover that outlasts the coronavirus pandemic, as South African bottles lose their spots on international shelves and thousands of jobs are lost.

Africa's most industrialised economy shuttered liquor stores at the start of a strict anti-coronavirus lockdown on March 27 to limit the spread of COVID-19, and reduce pressure on busy emergency wards.

The controversial booze ban was lifted on June 1st as part of a gradual easing of confinement measures to limit the economic setbacks of the pandemic.

But wine producers in the valleys of South Africa's Western Cape province are concerned the industry will struggle to bounce back.

The alcohol sales ban was coupled with a six-week export freeze -- raising concern buyers could turn to suppliers in other countries if demand abroad was not rapidly met.

"We were the only country in the world where wine exports were not allowed," said Boyce Lloyd, CEO of South African top wine and spirits producer KWV.

Lloyd said buyers in key importing countries such as Canada, Finland and Sweden removed bottles that did not meet a minimum sales rate.

"When you do not have stock on the shelf obviously you can't record a sale and then you get delisted," he said.

"That is a very real risk we are facing."

At the Nabygelegen wine cellar in the southern town of Wellington, owner James Mckenzie said international buyers had grown nervous about "putting all their eggs in one basket". 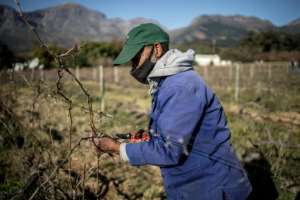 A controversial booze ban was lifted on June 1st as part of a gradual easing of virus confinement measures. By MARCO LONGARI (AFP)

"They are now looking at importing other countries' wines in case there is a problem again," Mckenzie told AFP. "Those are long-term decisions which may affect us over the next years."

The risk of being delisted has been exacerbated by delays at ports due to coronavirus outbreaks among staff.

The Western Cape is the hotspot of South Africa's epidemic, with more than half of the 92,681 cases.

Cape Town harbour staffers have not been spared.

"What we have been seeing in the last few weeks is major hold-ups at harbour terminals," said Wines of South Africa spokeswoman Maryna Calow, a non-profit that promotes wine exports. "They are currently running on a 50 percent capacity".

Only 55 percent of KWV wine exported this month had arrived on time, down from the usual 90 percent, according to Lloyd.

Delays could be as long as three weeks, he added.

The ongoing closure of South Africa's borders and lockdowns across the world have also made it difficult for wine producers to import packaging material.

"I'm talking about cork from Portugal, glass from Europe," Calow explained. "There is a major delay and backlog there."

Meanwhile, cellars bursting with unsold wine barrels could cause a drop in bulk price due to oversupply by year-end.

The combined effect could be devastating for South Africa's famed wine industry, which employs around 300,000 people.

"We are estimating around 18,000 jobs to be lost due to... bans on the sale of alcohol," Calow said, adding that 80 percent of wine cellars risked shutting their doors in the long term.

A bleak scenario that could be compounded by the accelerating spread of coronavirus, as South Africa hurtles towards an expected peak of infections in July.

Every confirmed case forces a winery to shut down operations for at least a day to sanitise premises and isolate contacts. 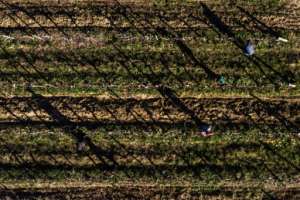 Every confirmed coronavirus case forces a winery to shut down operations for at least a day. By MARCO LONGARI (AFP)

Lloyd estimated the company had lost between 10 and 15 percent of production time over the three weeks.

Suppliers of boxes and labels are also affected.

"So you might be waiting for certain raw materials to arrive today for packaging tomorrow and you get a call from the supplier saying they are impacted by COVID."

One glimmer of hope has been a spike in online wine sales, which skyrocketed after the alcohol sales ban was lifted.

But courier companies have struggled to keep up.

"People have not had access to liquor for two months, so you are dealing with a substantial build up of orders," said Lloyd.