The Common Migration Story Of The Ewes And Gas Of Ghana 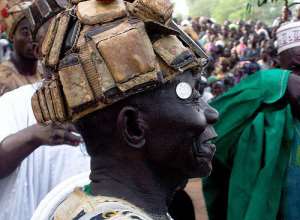 In my last attempt at being an amateur historian brought on by the COVID-19 quarantine, I concentrated on my Anlo heritage and how it was influenced by refugees from Ladoku, especially from Prampram (then Gbugbla), who fled to Anlo from the Akwamu war of 1679. Many were the additions, comments and corrections for which I am most grateful. No one has a lock on history and I consider the exercise a learning experience.

In the same article, I pointed to the similarity of the name of the Ladoku people from Prampram (Larkpleh) to my Anlo hometown, Alakple. Further research and reading has now established for me that the Prampram people settled there and gave it the name Alakple. The Reverend Carl Reindorf, writing in 1895 in “History of Gold Coast and Asante” wrote of the Ga King Ashangmo, who returned from exile in Little Popo to fight and defeat the Akwamus and reclaim Akra but was unable to do so. Rev. Reindorf wrote: “This obliged Ashangmo in the year 1680 to retire to Little Popo with all the Akras from Labade down to Ningo. The people of Lakple (Alakple) in Angula (Anlo) were at that time in Prampram; they also fled to that place.” If Reverend Reindorf is correct, my people at Alakple were originally from Prampram. This also explains their worship of the god Togbui Nyigbla which also came from Ladoku. The Larkpleh people could have moved to Alakple from Anloga, or settled directly there from Prampram or could have been part of the Larkpleh people who fled to Little Popo and later returned to Ghana.

Another fascinating discovery is the similarity of the Ewe rendition of the story of their migration from Notsie to one told by the Gas, albeit in a different context. According to oral tradition, the Ewes migrated from Notsie to present day Ghana to escape a wicked king called Agokoli. The story is told that King Agokoli oppressed the Ewes and gave them impossible tasks to perform. He first ordered them to kill all their elders. The Ewes however, hid one of the elders, Amega Tegli. Agokoli ordered that the Ewes tie the rafters of his new palace with ropes made of swish and mud. The people did not know how they could perform this difficult task and decided to secretly consult Amega Tegli. Amega Tegli advised them to go and ask Agokoli for a sample of the swish and mud rope so they could reproduce it. Upon hearing this, Agokoli knew that they had not destroyed all the old and wise people as he had directed, and became incensed. He decided to destroy the Ewes, hence their forced migration from Notsie.

The above story mirrors one told by Rev. Reindorf about the Akras (Gas). In that story, it was a wicked Queen, Dode Akabi, a princess of Obutu, and the mother of the future Akra King, Okai Koi. Queen Akabi usurped the throne when her husband King Mankpong Okai died, and ruled the Akras with an iron fist. This was supposedly in retaliation for the barbaric way the Akras had treated her grandfather Wyete, an Obutu King, who had refused, when offered, to be the king of all the Ga people then assembled (The Gbese, Tungmawe, Obutus and Ningowas). Legend has it that the Akras tore off one of his arms. As part of her tyrannical rule, Queen Akabi would ask the young men to catch and bring her a live tiger or lion. One day, she directed the young men to kill all the old and elderly. She then commanded the people to build her a palace and roof it with clay, using swish-strings to tighten it. The people did not know what to do and secretly decided to consult one elderly man who they had hidden during the massacre. The old man advised them to ask the queen for a sample of the swish-strings used for previous palaces so they could reproduce it. Hearing this, the queen knew that only an elderly and wise person could give this advice and pressured the people to tell her the truth. They confessed and brought forth the old man who so impressed the queen that she gave up the idea of forcing the people to use clay to roof the palace. Rev. Reindorf points to this as the genesis of constituting seven elders as counsellors to advise Akra Kings and Chiefs in every town.

Professor D.E.K. Amenumey, the eminent historian and many scholars agree that the Ewes migrated from Notsie to Ghana. The late Professor Albert Adu Boahen also concluded from the similarities amongst the Ewe, Fon and Adja languages spoken in Ghana, Togo and Dahomey (Benin), that the Ewes indeed migrated to present day Ghana from that region. It is however, argued that the Ga and Adangbe languages are indigenous and unique to Ghana and that any contact with Togo and Dahomey (Benin) was only by the Ladoku people who fled the Akwamu war in 1679. Thus, unlike the Ewes who are believed to have migrated from Yoruba through Dahomey to Ghana, the Ga-Adangbes were deemed indigenous people from Ghana who fled as far as Dahomey due to the Akwamu war, and later returned to Ghana.

The question then is: Why is the Ewe migration story of a wicked king asking the people to use a swish and mud ropes to construct a building so similar to the Akra story about Queen Akabi? Recently, I watched a video on Ghanaweb on the history of the Osu people of Accra and their migration to their present abode. https://www.ghanaweb.com/GhanaHomePage/NewsArchive/Ga-people-carried-the-ark-of-covenant-from-Israel-to-Ethiopia-Osu-Wor-Lumor-953884 ). In that video, the Chief Priest of Osu Nadu/Klottey, Wor-Lumor Nuumo Noi Sekanku Kpenuku II, in recounting the history of the Osu people, stated that they migrated from the old kingdom of Benin in Nigeria to Ghana. He also stated that they were known in Benin as the Larkpleh people. Similar to the Ewe migration story, he stated that they left to escape a wicked king and that during the migration they left in small groups drumming and beating gong gongs and walking slowly so that the king would not know that they were leaving. A similar story is told by the Anlo Ewes. According to their version, they left in small groups and walked backwards to give the impression that they were coming rather than leaving. This backward walk is usually demonstrated by the old ladies at the annual Hogbetsotso festival at Anloga.

I deem it more plausible that the people of Osu were the Ladoku Ga-Adangbes who fled the Akwamu war in 1679 and went as far as Dahomey (Benin), and that the return to Ghana was not from Benin in Nigeria but rather from Dahomey (Benin) where some of them sought refuge. I am not however, able to determine which wicked King compelled the Osu people (Larkpleh) to leave Benin and whether it is the same Agokoli the Ewes complained about. I am also not able to show whether Rev. Reindorf’s account of the ill-treatment of the Akras by Queen Akadi was merely anecdotal, and a copying of the Ewe narrative, being so close to what the Ewes recounted about king Agokoli of Notsie.

Article
Powered By Modern Ghana
Tanzanian poll is likely to usher in a new era of authoritarianism. Here's why
The Teaching Ministry Of The Church
Why African cities should have engaged non-state actors in the fight against COVD-19
The Angolan dancers who helped South African anthem Jerusalema go global
How viral song Jerusalema joined the ranks of South Africa's greatest hits
Ghana has a housing crisis: what we found in Kumasi, and what needs to change
#ShutItAllDown in Namibia – the fight against gender-based violence
Why Kenya's defence forces fell at the battle of El Adde
Stop Dragging The Office Of The Special Prosecutor Into Partisan Politics
COVID-19 Updates Live Dashboard
TOP STORIES