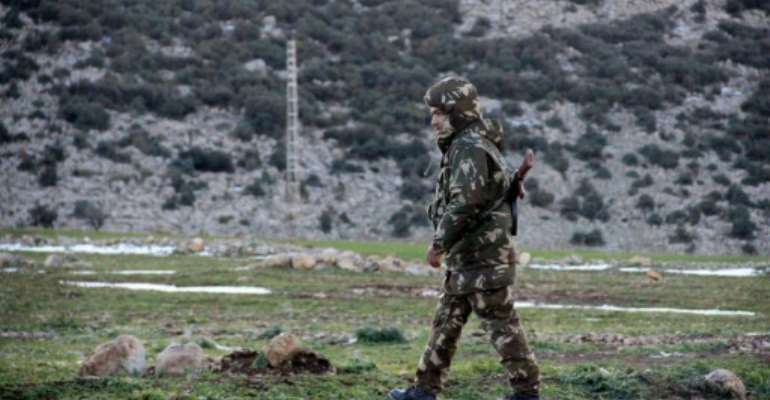 Algeria's President Abdelmadjid Tebboune, who is also the defence minister and supreme chief of the armed forces, is seeking a constitutional amendment that would open the way to army deployments for peacekeeping abroad. By - (RYAD KRAMDI/AFP/File)

Could Algeria soon send troops from its army, the pillar of the regime, to join peace-keeping missions led by the United Nations or African Union?

President Abdelmadjid Tebboune has urged a constitutional change that would allow deployments abroad, signalling a departure from a military doctrine that has barred interventions outside national borders.

The proposal by a government under continued pressure from a pro-democracy movement has sparked concerns about ending a cherished tradition of non-intervention and becoming embroiled in foreign conflicts.

Defence spending came to $9.6 billion in 2018, or 5.3 percent of gross domestic product, the highest ratio in Africa, according to the Stockholm International Peace Research Institute.

In this 2017 file photo members of the Algerian Special Forces demonstrate their martial arts skills during a parade marking the 55th anniversary of Algerian independence. By RYAD KRAMDI (RYAD KRAMDI/AFP/File)

The reform, proposed in May, comes as a bloody civil war rages in Libya, with which Algeria shares a nearly 1,000 kilometre (about 600 mile) border.

Mohamed Laagab, a presidency official, has pointed to the "presence of terrorist groups, foreign armies and mercenaries in neighbouring countries".

"The defence and the preservation of the stability and security of the country and its sovereignty can sometimes be undertaken outside its borders," he said.

A 2014 file photo shows Algerian army troops carrying out search operations in the mountainous eastern Tizi Ouzou region to find a French hiker who was kidnapped by militants linked to the Islamic State group. By Farouk Batiche (AFP/File)

Turmoil and instability also threaten Algeria's southern flank, in Niger and in Mali, where Algiers acted as a mediator in 2014-2015 between Bamako and armed rebel groups in northern Mali.

Algeria, traditionally an ally of Russia, has also been forming ties with NATO since the 2000s, especially in the context of fighting Islamist militancy.

The draft amendment plan was published in early May, weeks before the Algerian Abdelmalek Droukdel, head of Al-Qaeda in the Islamic Maghreb (AQIM), was killed by French troops in northern Mali, near the Algerian border.

Commenting on the killing, Algiers said at the time the fight against terrorism was the "responsibility" of the international community.

The amendment would give Tebboune, who is also the defence minister and supreme commander of the armed forces, the right to send troops on peacekeeping missions, provided these are backed by a two-thirds parliamentary majority.

Al-Qaeda in the Islamic Maghreb chief Abdelmalek Droukdal was killed on June 3 in Mali by French forces in an operation involving helicopters and a drone. By - (Hand-Out/AFP/File)

According to the amendment, it could, "within the framework of the United Nations, the African Union and the Arab League, and in full respect of their principles and objectives, participate in operations to restore and maintain peace".

"The option is up to the judgement of the head of state", said Ahmed Laraba, chairman of the committee of experts in charge of the proposal.

The amendment, one of several proposed changes to the constitution, will first be put to parliament and then to a referendum.

Under its current constitution, Algeria "refrains from resorting to war to harm the legitimate sovereignty and freedom of other peoples" and opposes interference in other countries' affairs.

The army has not participated in any external conflict since the Six Day War (1967) and the Yom Kippur War (1973) against Israel.

Some analysts fear changing the doctrine will expose Algeria to new and unwanted dangers.

"We do not want a change in doctrine because, until now, it has sheltered us from all foreign interference."

The army magazine El Djeich (The Army) in an editorial argued the proposed constitutional amendment is "in full conformity with foreign policy".

It accused detractors of "attempting to remove the debate from its real context and deliberately choosing ... to spread disinformation and poisoned ideas".

Smail Maaref, an expert on strategic issues, said the initiative "risks jeopardising Algeria's sovereignty as it will provide foreign forces with an opportunity to interfere in the country's internal affairs".

Laraba, who heads the committee dealing with the amendment, rejected those concerns.

He said peacekeeping missions could not be considered a form of intervention, noting that "there are no confrontations or use of heavy weaponry".

"These amendments do not call into question the fundamental principles around which Algeria's foreign policy is organised: sovereignty, non-intervention and non-interference," he added.

"This is in no way a new military doctrine."