Mahama’s NDC Has No Appealing Brand Except Politics Of Alarmism 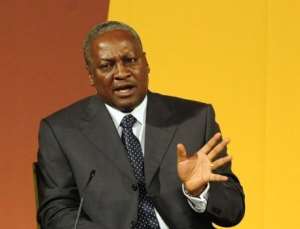 Although he has a famous job resume that includes “former president of the Republic of Ghana,” still Mr. John Dramani Mahama keeps displaying an insatiable taste for political power coupled with an unquenchable sense of entitlement to this country’s presidency. More so, by virtue of the fact that Mr. Mahama used to be president of Ghana, appears to have emboldened him to erroneously behave and talk in the public arena as if this country belongs to him more than anyone else.

The point is, it doesn’t matter President Akufo-Addo comes from the Eastern Region in Ghana just like he, John Mahama, hails from the Savannah Region, all the two regions located in Ghana. Nonetheless, ex-President Mahama intentionally or otherwise perpetuates a storyline that reinforces the notion that the Bole-Bamboi native is somehow more Ghanaian than the rest of us. Surely, he has benefitted more from Ghana than he has given back to this country, and here, his poor management of this nation in the past is my guide.

Mr. Mahama’s seemingly “first citizenship” mindset has mortally conspired to stifle his campaign team’s creativity in terms of coming up with an appealing brand or niche message for his never-ending presidential bid in the upcoming general elections. Come to think of it, there is no political leader in Ghana past or present who has been “lucky” more than ex-President Mahama. For instance, his ascension to the presidency was handed to him on the silver platter—by a tragic accident of history—so, not only does his unpreparedness radiate all around him but also, he is not a leader used to long-term planning.

Given the absence of an engaging or appealing brand for his 2020 general election campaign, the National Democratic Congress (NDC) presidential flag bearer and his followers have adopted a strategy of politics of fear or alarmism. This is why all over the place, the JDM-bankrolled NDC is spewing politics of alarmism, fear, or pushing a specter of bloody civil war in Ghana, in the likely event of President Akufo-Addo winning reelection in December 2020.

It’s a fact that Mr. Mahama’s presidential campaign team lacks appealing brand; and, this has led the country’s main opposition party to resort to alarmist politics. Indeed, Mahama-takeover NDC’s politics of alarmism is clearly rooted in the colossal misreading of the mood of Ghanaian voters, including the true extent of the Ghanaians’ political savviness. Mr. Mahama thinks the people Ghana have problems with their sense of recollection; that, they can’t think far enough to remember his past mismanagement as president.

Honestly, former President John D. Mahama-engineered politics of alarmism/fear devoid of effective or appealing campaign message is a reflection of the NDC flag bearer’s all-too-familiar incompetence when he was in the political saddles of this wonderful nation of Ghana. Thus, the prospects of this inept ex-president even getting another chance through the country’s main opposition party to compete for the office of the presidency again is quite unsettling scenario, needless to say a sad state of affairs. Can’t NDC find a more viable candidate?

In other words, this is a former head of state of this nation, who presided over sheer incompetence and corrupt government at the highest level. Yet, he and his defenders are nonchalantly going across the country, spreading fears and sounding unfounded alarms of civil war to come if their political wishes are not met in the upcoming general elections in December. As the NPP National Chair Mr. Freddie Blay recently lamented to the effect that Mahama’s NDC politics of “my way or the highway” is not a statesmanlike position to take to promote genuine democracy anywhere in the world. Ghana will never burn because Mr. Mahama’s impending defeat.

Clearly, Mr. Mahama’s political (mis)demeanor can best be captured or understood via the observation attributed to the Nobel Laureate Professor Wole Soyinka that “Only in Africa will thieves be regrouping to loot again and the [people] whose future is being stolen will be celebrating…” leaders such as the current NDC presidential candidate. For all those past years that he was in power, what were the monumental achievements of Mahama-led administration that can persuasively be used as appealing brands for his 2020 presidential campaign?

Certainly, no serious democratic republican society will allow a former incumbent president defeated miserably in recent election or if that contestant genuinely has grounded political principles, will ever try to run for the same political office for which he/she was soundly beaten by the very person he is set to contest with him again. Let us assume Mr. Mahama has “well-intentioned plans” for the country now, notwithstanding, those “plans” woefully miss a deeper political realities that his NDC-led corrupt government helped to foist upon millions of Ghanaians.

Overall, Ghanaian electorate is not “forgetful” as Mahama-funded NDC wants many of us to believe. Hence resorting to politics of alarmism, fear, threat, and appealing to the basest instincts of Ghanaian citizens will not yield any victorious outcome for Mahama’s electoral fortunes. Similarly, using the Electoral Commissioner Ms. Jean Mensah as a poster child of NDC’s misinformation campaign is not a winning proposition.

Besides, every reasonable-minded Ghanaian knows Mahama-hijacked NDC’s “gold-standard” Electoral Commissioner Ms. Charlotte Osei’s ouster was not caused by her successor Ms. Jean Mensah nor by Nana Akufo-Addo. Instead, Madam Charlotte Osei shameful exist was initiated by some members of her own staff, and the high heaven knows this fact except ex-President Mahama and his cheerers.

This upcoming December 2020 general elections will not be won based on politics of alarmism or on cooked-up stories about Ms. Jean Mensah. Rather, the elections will be campaigned and won on the appealing brands or big policy ideas of the banking/financial sector recapitalization drive; Planting for Food and Jobs; payment of teachers’ allowances; NaBCO; 1D1F, and above all the flagship Free SHS program, among many others. Now, the big question is: what is or are Mr. John D. Mahama’s appealing brands for his 2020 presidential campaign apart from “Akufo-Addo this or Jean Mensah that?” Ghanaians today are smarter than Mahama-NDC’s campaign of alarmism and threats.

Bernard Asubonteng is a US-based writer and political science lecturer.