Why Akufo-Addo Deserves Another Term (Part 1) 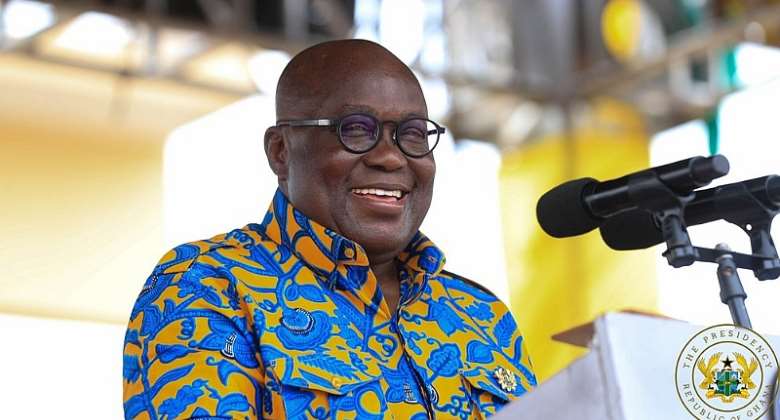 The recent affirmation of President Akufo-Addo by the National Executive Committee of the NPP has given impetus to his candidature towards the impending general elections. This unique election presents us as a nation with a scale to weigh whether we want progression or retrogression – It will be determined on the heels of justified realities on the ground based on facts and data in the comparison between the two dominant electoral players within the polity of our nation. Like, someone puts it, ‘he who feels it, knows it better’, a line that the citizenry will have to manifest through their ‘golden thumb’ in deciding the next phase of this nation of ours.

There is no grain of truth in the assertion that the Ghanaian today is worse off under this current dispensation – to put it more succinctly, today’s Ghana is far better than yesterday’s Ghana. Indeed, the main opposition party and their counterpart ‘regime changers’ who operate behind the veil of civil society or ‘neutrals’ are usually mesmerized by the ‘magical performance’ of the Akufo-Addo led government.

This is so because they were under the mistaken belief that many of the NPP 2016 manifesto promises were flowery and could not have been achieved in any way possible. They find it difficult to believe that these achievements within a short-pace have sprung up through the length and breadth of our country which in most cases reflects in the standard of living of the Ghanaian. Truly, every household in Ghana has been touched either directly or indirectly.

For example, the President in recent times has announced measures to build Eighty-Eight (88) modern district hospitals across the country within a year, however, the main opposition party is up in arms against the government that it is not possible to achieve same - such a false leap in logic by a group seeking the mandate of the people to transform this nation must not be countenance – what the country needs are dreamers and doers, of which the current President is offering in leaps and bounds. We cannot blame them for their deficiency in accepting such a realism, however, we can always tap them to wake up and smell the coffee.

The Akufo-Addo government is by no means perfect – there is still some more work to be done. However, the giant leap in gains made so far in all sectors of the national front is exceedingly remarkable – from education, to energy, to health, to social infrastructure, to social intervention, ‘edaho plain’ in taking a cue from my friend, the venerable Emmanuel Agyarko of blessed memory.

I met Aunty Afi, a single parent and a widow, who narrated to me that but for Free SHS none of her family members has had the opportunity to school up to the secondary level. The highest level of education amongst the eldest of her children and that of her sibling’s children was Junior High School.

The introduction of Free SHS has given her family an opportunity to get their children to attend secondary school including some of the grade A schools, a dream which she thought was never possible in her lifetime at least. She tells me that the eldest of their children who are in their early thirties (30) have also considered going back to seek secondary education to better themselves. Aunty Afi who is a petty trader at Mallam-Attah market is now confident that her children can also become lawyers, doctors, teachers etc like other privileged children.

Those who are able to afford secondary education will now be in a position to save some money in their pockets or use the same for other exigencies. These are realities of the moment that cannot be ignored. Every life matters, including children from poor backgrounds. The main opposition party is on record to have pooh-poohed this flagship program. However, observing its growing success, they claim to have birthed and began the progressive implementation of the idea during their tenure. This claim is further from the truth.

The President in making sure that the quality of education is not adversely affected as a result of the pressure that comes with the Free SHS program has rolled up massive intervention programs such as the expansion of infrastructures in the existing secondary schools – no secondary school has been left out in this endeavor. The able Minister of Education, Dr. Mathew Opoku Prempeh is on record to have said that additional 3321 classrooms have been added to the existing ones as compared to the 879 classrooms that was added by the previous government which had 8years in office.

There has been a massive enrollment of close to about 50,000 teaching and non-teaching staff under the Ghana Education Service whose salaries are being paid without delay and previous arrears of existing teachers have been significantly cleared. Free distribution of textbooks and other learning materials, free hot meals a day for both day and boarding students which was never the case in the past and the absorption of WASSCE examination cost of all students, are but a few of the interventions under the Free SHS program.

Significant among the litany of achievements are the re-introduction of the nursing and teacher training allowance which was abolished by the previous administration for want of funds as they claim. When the President talked about Ghana having the resources to undertake any kind of project it wanted to do, this was what he meant – that governance is a matter of choice and the capacity to raise and manage scarce resources.

Humu Kulsum, a promising young lady who lived at Kumasi Aboabo, who had to abandon her nursing training because life was becoming unbearable as a result of the abolishment of the nursing training allowance is back to school with the appetite to complete her training. The monthly stipends were a source of her living expenses. Relieving unemployed students who relied greatly on such stipends could expose them to many societal vices.

At a time when the world needs a lot of persons in the healthcare system, this could be one of the game changers to get more of our youth to enroll in nursing training – at least, the allowance could serve as a motivation and also ease the pressure on themselves and their parents. What a foresight this is.

The same story could be said of Mawuli Kevor a native of Kpando who wanted to upgrade himself as a pupil’s teacher but had to suffer the fate of the draconian cancellation of the Teacher Training Allowance which once provided him some cushion. The primary aim of the allowance as it was introduced in the 1960s was to attract more people into the teaching profession. Today, Mawuli Kevor and his colleagues are beaming with smiles while pursuing their profession. Such an opportunity would have been lost on them if the main opposition were to be in power or had the rare opportunity of being in government again.

There are 100s of thousands of people who find themselves in similar situations as Aunty Afi, Humu Kulsum, and Mawuli Kevor all over the country. President Akufo-Addo has demonstrated to be the champion of the people who offers hope and solution to his people’s plight with effortless hard work.

Truly, elections have consequences and we the citizens must exercise wisdom and best of endeavors in choosing our leaders. It is important that we offer our support to the President through and through so as to achieve a Ghana that we all can be proud of.

I will end this first part of my epistle with a quote from President Akufo-Addo which reads “if a free society cannot help the many who are poor, it cannot save the few who are rich”.