In Senegal, the struggles of a small airline during coronavirus 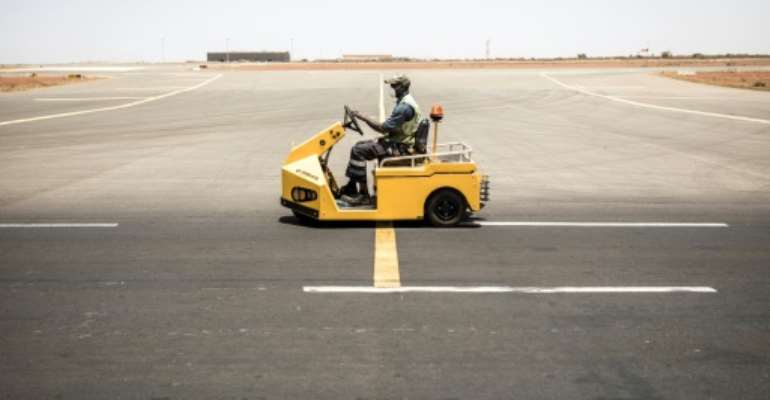 Launching an airline in Africa is a notorious challenge in a continent and sector where opportunities are often crimped by regulations and national champions are dominant.

Now, for plucky entrants, coronavirus has added to the checklist of problems, as a small Senegalese airline can attest.

Transair, an ambitious company founded 10 years ago, has no passengers because of the pandemic -- but it still has to fly its planes.

Once a week, one of its planes makes a sortie out of Dakar's Blaise Diagne International Airport, even though not one of its passenger seats is filled.

The reason: The company has to ensure its planes meet standards of airworthiness and pilots carry out at least three takeoffs and three landings every three months -- requirements for retaining their commercial flying licences.

Pilot Laurent Klinka said he had mixed feelings as he prepared a 50-seat twin-jet Embraer ERJ 145 for a 30-minute trip up Senegal's coast, reaching the northern town of Saint-Louis before turning round and heading for home.

"It's a pleasure to get back in an aircraft, even if it's just for an hour," the French national said.

"But everyone is afraid of what could happen with this crisis."

All international flights to and from Senegal have been suspended since March 20 -- the exceptions being for a handful of medical evacuations and repatriation flights, as well as for maintenance flights.

Late on Thursday, the government announced that the suspension of all flights in and out of the country would be extended until June 30.

For Transair, the one-hour validation flights for its four Embraers and two Boeings costs more than a thousand euros ($1,100) in fuel alone. 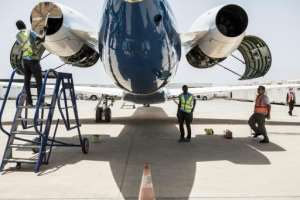 Transair's ground crew prepare a twin-jet Embraer for a one-hour technical flight, one of the few exceptions allowed under Senegal's anti-coronavirus restrictions. By JOHN WESSELS (AFP)

The pandemic has dealt a crippling blow to firms that have staked much on shuttling European vacationers to Senegal's beaches and forests.

The International Air Transport Association (IATA) estimates the crisis will inflict a hit of $314 billion (286 billion euros) on airlines' turnover this year, equivalent to a fall of 55 percent over 2019.

The sector is unlikely to return to pre-pandemic levels before 2023, IATA says.

Such talk is grim news for Senegal's three airlines, the biggest of which is the national flag carrier Air Senegal, founded in 2016, which specialises in scheduled flights between West Africa and Europe.

The smallest is Arc-en-ciel Aviation, which caters to charter flights.

In the middle is Transair, which pitches to both markets -- scheduled and charter -- with a special eye on tourism.

In normal times, its fleet carries out around 60 flights a week.

Forty of them are on domestic routes, while the remainder are around the West African region, to destinations such as Cape Verde, The Gambia, Guinea and Guinea-Bissau.

The company says that last year it flew 90,000 people as it carved out new routes, including to Liberia, and recorded a slight deficit on its turnover. It declined to give figures.

"Before (the pandemic), we were expanding, we were even thinking about starting inter-continental flights in a few years," Transair's boss and founder, Alioune Fall, told AFP. 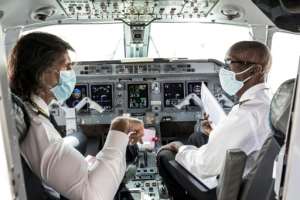 The small airline carries out once-a-week flights to ensure its planes remain airworthy and its pilots have sufficient flying time. The one-hour circuit costs $1,100 in fuel costs alone. By JOHN WESSELS (AFP)

"Now everything's come to a halt. When you have been doing three or four flights a day and then it all suddenly stops, you have no idea what lies ahead."

Seeking to dampen the impact of the crisis, the government has earmarked 77 billion CFA francs ($120 million, 110 million euros) in support for the tourism and aviation sector.

Of this, 45 billion francs is likely to go to Air Senegal, while Transair, as a private company, is likely to be offered low-interest loans and a delay in value-added tax (VAT) payments.

So far, Fall has retained his 104 employees throughout the lockdown, but admits to wondering whether he will be able to meet the wage bill for May. 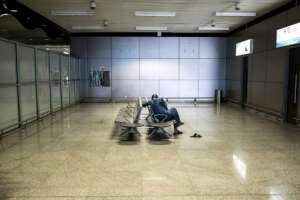 There is a "risk of bankruptcy" in the direst scenarios, he said, but insisted that he remained hopeful.

"This is why the planes are still flying," he said. "Activity will pick up, starting within a minimal service."

Ibra Wane, a Senegalese who is a consultant for IATA and owner of Arc-en-Ciel (Rainbow), warned that "bloody" days lay ahead.

"Budgets for business travel are going to be reduced, and tourism will shrink terribly. If (airline) companies do not scale back their operations and cut costs, they could disappear."

NDC Dominates Here, If Your Problems Are Not Being Solved, I...
2 hours ago