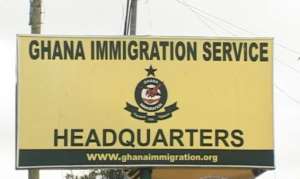 Six junior officers of the Ghana Immigration Service (GIS) have been promoted for their dedication to duty in the fight against the coronavirus disease in Ghana.

According to a statement from the Immigration Service, the six include five officers who rejected a GH¢1,900 bribe offered by Burkinabe migrants who were arrested for entering the country illegally.

The five, who were serving under the Northern Regional Immigration Command on May 3, 2020, intercepted and arrested the Burkinabes at the Savelugu inland immigration checkpoint, after the foreign nationals entered Ghana illegally through unapproved routes of the northern frontiers, and were en route to Accra on an OA bus with registration number GT 8242-19.

The sixth officer, ICO Lawrence Appiah Marfo of the Kasoa District Command was also promoted for putting his life on the line and sustained gunshot wounds while pursuing smugglers at the Hamile border post where he was deployed for 'Operation Conquered Fist.'

He was airlifted by the Ghana Air Force to the 37 Military Hospital in Accra for medical attention.

The Immigration Service said ICO Appiah Marfo is currently in a stable condition and the 19 Burkinabes have since been repatriated to their home country.

The six Officers have since been decorated with the new ranks at their various commands.

Ghana’s borders have been closed since March 2020 as part of efforts to stop the importation of new COVID-19 cases into the country.

There have however been several attempts by some persons, especially from Ghana’s neighbouring countries to enter the country illegally through unapproved routes. More than 200 of such persons have been arrested along the country’s borders.

The Ghana Immigration Service is the main security agency in charge of Ghana’s land borders and is part of the security agencies drawn into the national plan to fight COVID-19.

The service says it remains resolute in the fight against the deadly the virus.