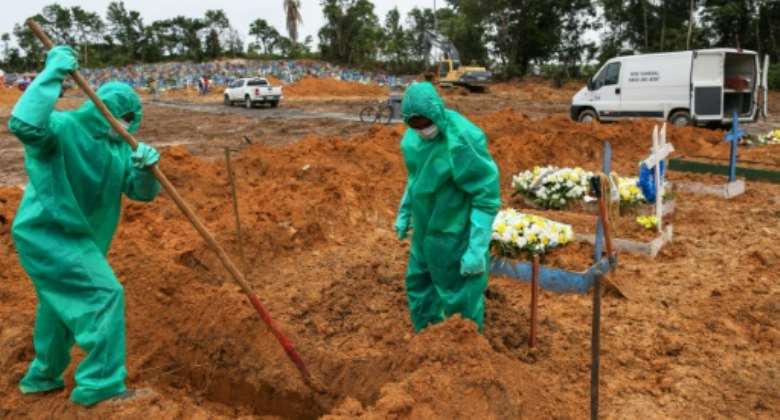 The economic carnage unleashed by the coronavirus pandemic was brought into sharper focus on Thursday, with grim data showing major slumps in German and French industrial output and the British economy forecast to slump 14 percent this year.

Governments around the world are under immense pressure to ease the economic pain caused by measures to stop the virus, which has claimed at least 260,000 lives, left half of humanity under some form of lockdown and made millions jobless.

Some European and Asian nations are now cautiously easing restrictions hoping to stabilise their reeling economies, and US President Donald Trump is pushing for lockdown measures to be lifted.

But experts have warned that social distancing measures remain necessary until a vaccine is developed -- and governments are keen to avoid a devastating second wave of infections.

The British government was on Thursday reviewing lockdown measures, with a partial easing expected to be announced this weekend.

The easing has already begun in Germany, Europe's largest economy, while France is inching towards its own loosening of lockdowns.

Highlighting the economic imperative, the Bank of England said the GDP of Britain -- which has the second-highest number of deaths in the world -- was set to plummet 14 percent this year.

The forecast came a day after the European Union warned of a 7.7-percent eurozone contraction in 2020.

Restaurant owners protest on Piazza Sempione in Milan against the prolonged closures of their businesses. By Piero Cruciatti (AFP)

Industrial production in Germany fell by 9.2 percent month-on-month in March, official figures showed Thursday, the worst fall since the manufacturing output data series was started in 1991.

The slump in France was even greater with industrial output dropping by 16.2 percent in March on a monthly basis, statistics institute Insee reported.

Migrants, part of a group of 76 Guatemalans deported from the United States, wave from a bus upon landing at the Air Force base in Guatemala City. By Johan ORDONEZ (AFP)

Airlines and travel are among the sectors worst hit by the pandemic, with flights grounded worldwide and social distancing measures severely limiting leisure and business trips.

Adding to the list of those casualties on Thursday, British Airways parent IAG said it had plunged into a huge loss in the first quarter, and said it did not expect pre-crisis passenger demand to return until 2023.

Across the Atlantic, Trump said Wednesday the coronavirus pandemic was a worse "attack" on the United States than either Pearl Harbor or 9/11, taking aim once again at China, which he said should have stopped the disease in its tracks.

US President Donald Trump speaks about COVID-19 in the Oval Office of the White House. By SAUL LOEB (AFP)

The president has ramped up his rhetoric against Beijing in recent weeks, as the death toll in the US has continued to climb, and as he agitates to re-open the shuttered -- and stuttering -- economy.

"It should have never happened," Trump said of the disease that emerged in the Chinese city of Wuhan last year.

The Japanese assault on the Pearl Harbor naval base in Hawaii drew the United States into World War II.

The September 11, 2001 jihadist attacks on that killed about 3,000 people and triggered two decades of war.

"We urge the US side to stop shifting the blame to China and turn to facts," foreign ministry spokeswoman Hua Chunying told reporters in Beijing.

Tom Frieden, former director of the Centers for Disease Control and Prevention, predicted the US toll could top 100,000 by the end of May.

A health worker stands next to the funeral pyre of a man who died from the COVID-19 coronavirus, at Phaphamau Ghat near the River Ganges in Allahabad. By SANJAY KANOJIA (AFP)

The pandemic has hammered healthcare infrastructure in many parts of the United States, including New York City, and its impact has been particularly severe on the least privileged sections of American society, such as undocumented migrants.

Many of them are afraid of deportation, as well as the risk of racking up unpayable medical bills and hurting their quest to obtain legal status. As a result, many have contracted and died of COVID-19.

Workers wearing protective gear bury a coronavirus victim at a cemetery on the outskirts of Saint Petersburg. By OLGA MALTSEVA (AFP)

"He was very ill but did not want to go to the hospital," Victoria, a Mexican nanny in New York City, said of her 69-year-old husband who had kidney problems and diabetes.

"After two weeks, when he could no longer walk or breathe, my daughter took the risk, loaded him into the car and drove him there. He died three weeks later."

The need for social distancing has shredded by global sports calendar, but with financial pressures mounting, the biggest leagues around the world are exploring ways to resume play.

The Bundesliga, Germany's top football tier, on Wednesday became the highest-profile league to announce a resumption of matches, and could be a test case for restarts elsewhere.

Games will be played from May 15 -- but without any spectators -- after getting the green light from top authorities on the condition that strict health and hygiene guidelines are followed.

"We are particularly responsible for tens of thousands of jobs in diverse industries that live with, and through, football," said Manuel Neuer, of Bundesliga giants Bayern Munich. "And we are responsible for all those fans for whom football is a big part of their lives."