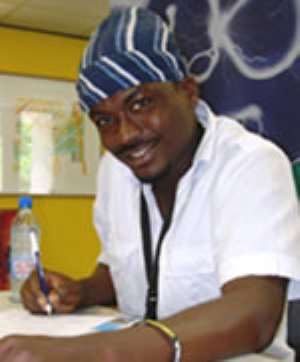 Check out our exclusive interview with Batman Samini. Know more about how he started, who helped him through with his first hit and the challenges he faced as an upcoming artist.

What do you know about Batman? In this exclusive interview, we ask him whether he smokes or not and what his future plans are. This is a SHOWGHANA exclusive.

SHOWGHANA: Batman, what is your real name?
Batman: I'm Emmanuel Amid Samini.SHOWGHANA: Did you want to become a musician when you were a child?

Batman: I have always wanted to do music right from my childhood because my parents saw it even before I realized it myself. That is how it all stated and just as I completed secondary school education I got into music.

SHOWGHANA: What is your educational background?
Batman: I went to Holy Family School for my basic education and secondary at Margaret Mary's secondary school in Dansoman. After my S.S.C.E. when I was waiting for my result I took that time to get seriously into music. But I will go back to school though.

SHOWGHANA: So how did your music career start?
Batman: I was part of this youth group in my church and there was a variety show in church and a friend motivated me to do gospel rap on that day, so I did and people began to see the potential in me and kept on advising me to keep doing it. From there music became part of anything I did and here I am.

SHOWGHANA: Why did you decide to start your music career with featuring on other people's songs?
Batman: I didn't choose to do that. In the cause of that I met Sony Bally who had featured on Mary Agyapong's “Ade dede” which was a hit and before Mary's second album Sony had to leave for the UK, so since he was my friend he introduced me to Mary to feature me on her album any time she wanted since he wouldn't be around to do it for her. Right from there Mary featured me on her second album and that was the first song that brought me out. Most people realized I was good so they kept featuring me and as a desperate new artiste who wanted to come out I did most of them for free unless may be the person himself has something for me, until I realized I have done over fifty of them.

SHOWGHANA: Do you mean you featured on over fifty songs before your first album?
Batman: Yes, I think it is even more than that.

SHOWGHANA: How was it like, bringing out your first album after featuring on other people's albums?
Batman: As an artiste coming up, it's my ambition to have my own album some time to come but I went through hard times to get a good deal. I was with Ashanti International all the time, so got the recording and everything done because I was with Nana King. I must say I did everything with Nana King who gave me all the support I needed and the motivation of my friends. After everything Alex Frimpong of Lexyfri productions took it up to produce me.

SHOWGHANA: What are some of the challenges you faced?
Batman: For challenges I went through a lot. We all know how it is when nobody knows what you can do. It was difficult impressing people out there, even before I got the chance to feature on songs for the first time no one knew what I was capable of doing. Nobody wanted to move with me then, but today everybody wants to move with me because they think I have what it takes. When I wasn't the Batman I am now, I had some friends who moved with me and are still by me and there are others who didn't even think about what I was up to and today because I have become who I am they want to get closer to me but just straight minded, clean hearted, focused and very principled. I don't make too many friends.

SHOWGHANA: What is your biggest achievement?
Batman: I made it with my first album and I guess this was the gate way of greater things to come. I think I am doing something beyond just hiplife. The biggest thing is to be able to win a MOGO award.

SHOWGHANA: How do you feel as the first hiplife artist to win MOGO award?
Batman: I feel like a pace setter. I feel proud as an ambassador of Ghanaian music to the world.

SHOWGHANA: What accounts for this success?
Batman: It's simply the most high and Buoi!

SHOWGHANA: How are you doing on the international scene?
Batman: Anytime I go to foreign countries I have something to offer my fans out there. I always have a good time and great response anywhere I go like the states, the UK, Canada, Italy, Holland, France, Germany and other countries I have performed. I should say that if Ghanaians or African musicians should broaden their scope of music and learn more, make their music with an African touch for a world wide audience, I think it is going to help and that is my vision.

SHOWGHANA: When and where were you born?
Batman: I was born in Accra at Adabraka on 22nd December 1981.

SHOWGHANA: Where do you come from?
Batman: I come from WA in the Upper West region.

SHOWGHANA: Are you married?
Batman: Am not married but I have a very beautiful daughter. She is Theresa.

SHOWGHANA: What do you do aside music?
Batman: My life is music. All I do is music and nothing else.

SHOWGHANA: What would you want to do after your music career?
Batman: I am thinking of studying music; own a record label, my own studio, my own camp and my own musical set up. I intend to make music more professional and business wise.

SHOWGHANA: What's your favorite colour?
Batman: I think I like representing the red, gold, green thing but I feel very good when I'm in white.

SHOWGHANA: What do you do on your leisure time?
Batman: I play the guitar any time I'm free.

SHOWGHANA: Where do you take your inspiration from?
Batman: The biggest among them is God Almighty and those who inspire me physically are Bob Marley, Buju Banton, Sizzla Kalonji and other big reggae super stars. So I have been infected with reggae right from the scratch.

SHOWGHANA: Why did you choose to put on dread locks?
Batman: I think civilization has run through Africa for a long time and we have learnt so many things now. We wear clothes, we drive cars and we cut our hair which we never used to do. Originally, blacks were like that so if I exist now and I think I can keep a little bit of my blackness and keep it good, I don't think I should have any problem with it. So anywhere at all times I will stand out black.

SHOWGHANA: How true is it that everybody with dread locks smokes wee?
Batman: There is dreadlocks and there is wee, they are two different things. So that is never true.

SHOWGHANA: Do you smoke?
Batman: The fact that I smoke or not do not make any difference.

SHOWGHANA: How do you see hiplife from when it started till now?
Batman: Hiplife is growing very fast and it has a very bright future because looking at what Ex-Doe, Reggie Rockstone, Nananom and others were doing back then and the new styles it has grown into. Believe me hiplife is now growing and it has so much to offer.

SHOWGHANA: Finally what would you want to tell your fans out there?
Batman: For the upcoming ones they should be very humble and trust me, they will pass through. To the general public all I will tell them is “Di wo lane mu”.

Hottest Photo Reports
Catch up with all the political quotes from our politicians.
Advertise here
More from Interviews
ModernGhana Links
Davido reveals new plans to launch game show and also a documentary with Netflix #BBCTHISISAFRICA
Stop stealing songs – Songwriter to 'lazy' musicians
I Want To Use Music To Connect To My Fatherland — Fadu
TOP STORIES