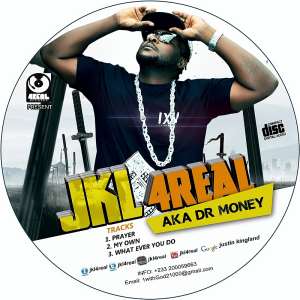 The song is dubbed "Prayer" and it's a long, meditative release. jkl4real said it's not from his upcoming Album, but instead "just some things on my mind." Through its lengthy playtime, the song employs a number of different genres and sounds.

Last month, jkl4real hopped on stage for a surprise performance with Ras Kuukus hit single “Nuff Gyals” tune. Now an unexpected but very welcomed track has been released by jkl4real .

''Prayer '' is the second studio single recorded by Nigerian(Malaysian) singer and songwriter Jkl4real. The song released Today .3February 2016, Under 4Real records. Following the release and international success of jkl4real's second studio single this year , he had considered making a successful deal out of this single .According to the singer, the single's title is a reflection of his when he was in comma and what God revealed to him

JLK is a renowned reggae dancehall artiste who has done collabos with Sizla Kalonji and Elephant Man. He has also rocked the same stage with super stars, like Rita Mali, High Jahman, Gregory Isaac, Damian Marley, and Nigeria’s Majeck Fashek amongst others.

The Prayer is the key crooner is also a label mate with Ras Kuuku and their record label, 4Real records is based in Malaysia and the United States.

The song builds more gradually to the center than “My Own”, but like this track, his chorus is huge. He gives it all in the hook as a passionate line like “prayer is the key” demands. The Nigerian(Malaysian) raggae dancehall musician’s new single will be his second GH release, so maybe he’ll win more new ears with this one.

His Inspirational new single, “Prayer”, is available on Hulkshear

What Will The Publication Of 260-Page Cocoa Road Audit Repor...
9 minutes ago