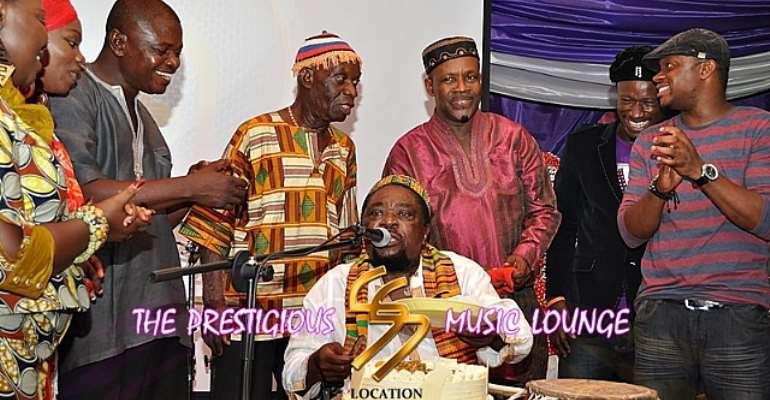 Argh, what a show!!!!!!! With all the bandsmen in the Legendary Afro-pop, rock and jazz band present at the Osibisa live in Concert to celebrate Teddy Osei's birthday, patrons who joined in the celebration were enthralled and taken aback in the late 1962's at the Scratch Music Lounge, East Legon last night.

The first ever British Afro-pop Band started the show with the instrumentals of'Music of gong gong' recorded in 1971 to walk the celebrant, Teddy Osei onto the podium with two Atumpan drums readied for him and he kicked start the show singing and drumming along with the entire band.

The second song on the night was 'Fire will burn you' recorded in 1972, followed by 'Welcome home' and 'Sunshine day' which was vocal led by the 'simigwado hene', Gyedu Blay Ambuley and supported by Kwame Amoakohene and then 'Woyaya'(background song of local drama, Cantata, formerly shown late afternoon on Sundays), 'Kokrokoo', 'Kilele', 'the warrior', 'the Coffee song', 'Dance the body music' and ended the show with 'I feel Pata Pata' which is loved by all both the young and the old in across the globe.

In an interview with Scratch Magazine, the celebrant and found of the Osibisa Band, Teddy Osei expressed his gratitude to his bandsmen for being with the band since it time of memory, “I am grateful to the Lord almighty for bringing such wonderful people into my life to support the band to greater heights and may the soul of our members who have passed on rest in peace.”

He further noted that he is very much impressed with the response from the audience as they cheered and urged them to dig deep into their archives to sing their very old songs, 'in fact the band really enjoyed themselves and I thank Kofi Amoakohene and everyone who was present at the concert.

“It's really a dream comes through and lovely to see the grown-ups actually enjoy themselves to the fullest with our music, it's so beautiful and very exciting and the band also did very well”, he appraised.

Indeed the Criss Cross X'mas Rhythms that explodes with happiness really brought back old memories as patrons took over the dance floor to do the 'twist n turn' moves, 'cha cha' dance steps, among others moves with their partners. The show was opened with a song by Elivava, the African Gold titled 'Kojo Langa'.

The concert saw Bice-Osei Kufuor, Obour, President of Musicians Union of Ghana (MUSIGA) and Carlos Sakyi, President of Copyright Society of Ghana as well as Bessa Simon, a key member of MUSIGA also the Keyboardist for the great Osibisa Band.

Alliance of CSO petitions Parliament for audience with GNPC ...
16 minutes ago