It is Voting Time in The VGMAs. 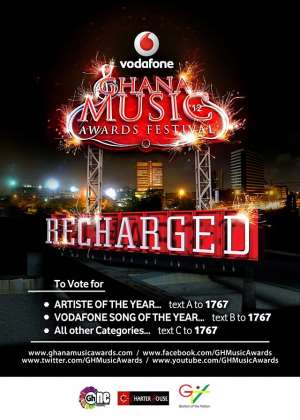 THE battle to pick awards at the main show in April has already begun with several nominees taking to social media platforms to engage their teeming fans. On the other hand, other nominated artistes are directly canvassing for votes through several means.

After weeks of anxiety and speculation among industry professionals and the general public, organisers of the Vodafone Ghana Music Awards 2012, Charterhouse, finally unveiled the nominees list for this year's award festival last week.

Artistes gunning for the topmost category for this year's festival, the Artiste of the Year Category, are Okyeame Kwame, Sarkodie, Becca, R2Bees, 4x4 and Kwaw Kesse. With the latest announcement from organisers, the winner of this category takes home GH 10,000

Other artistes with multiple nominations expected and highly tipped to pick up a few awards include Stay Jay, D Cryme and Efya. However, the Vodafone Ghana Music Awards 2012 is more likely to be very competitive with an increase in the money package for all winning artistes.

However, there has been a heavy rotation of discussions on the award nominees with connoisseurs of the music industry as well as followers of the awards festival tipping artistes they consider to win the various categories.

The nominees jam train will soon be hitting Kumasi, Takoradi then Accra. This will be accompanied by club parties in several cities which will witness performances from some of the hottest musicians aside the nominees.