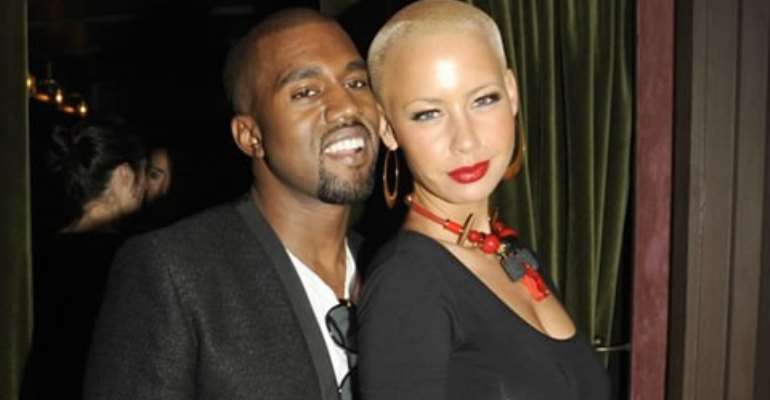 Kanye West and Amber Rose's relationship ended a year ago

American super model, Amber Rose has opened up about what led to her breakup with hiphop star Kanye West about a year ago.

Amber, 28, is currently dating rapper Wiz Khalifa of Black and Yellow fame. She had blamed television personality, model and actress Kim Kardashian for her break up with Kanye in an interview with the Star magazine some days ago.

In that interview, she said, “Kim is one of the main reasons why me and Kanye are not together. She's a home wrecker!”

"They were both cheating on me and Reggie with each other. She was sending pictures, and I was like, 'Kim, just stop, don't be that person',” the model now turned musician added.

But in a sharp contrast, Amber Rose told Funkmaster Flex of Hot 97 in an interview Wednesday that She and Kanye West were just not compatible that's why they broke up.

“There were so many reasons why me and Kanye West are not together. We are just not made for each other, we just don't belong together.”

She had also earlier dropped this similar contrast during an interview on the Wendy Williams Show in November last year: “I will never get back with Kanye … there is no way … I want to be with Wiz for the rest of my life.”

Kim Kardashian who stunned the world filed for divorce from Kris Humphries after 72 days of marriage is said to be back together with Kanye West.

The two are said to have hooked up again after Kim went to see Kanye West and Jay-Z's Watch The Throne Tour in Los Angeles at the Staples Center, Los Angeles.

According to the The Urban Daily, Kanye and Kim were spotted spending time together at the after party for tour in Los Angeles and even rumored that they might have left the club together.

Amber and music
After disclosing that she was venturing into writing books last September, Amber has announced that she is venturing into music releasing her first single, Fame, featuring Wiz Khalifa to back that.

Fame, she said represents the ups and downs of fame. She is currently working on a full album to be released later.

Interestingly, Wiz Khalifa didn't hear the track during the recording process. Amber asked him to appear on it after it became a finished product.