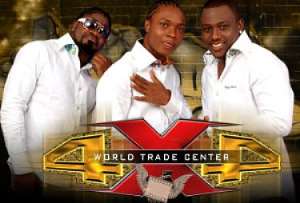 The 4X4 Album photo
The triple trio 4X4, made up of Abortion, Captain Planet and Fresh Prince is set to rock the Aviation Social Center, Air Port Road on the 28th of October 2010, at 5pm for the 'Prestigious JAM Night' of Regent University-parliamentary week celebrations.

Also on stage to tag along 4X4 will be the sensational composer of the song 'Hotter than Fire' Roney'O,  from the camp of the guys with skills in a million, 'Skillions' will be Lil Shaker plus Bro Kelvin Beatz,  and on the mixer board, mastering all these artistes will be the  heavy weight rapper, beat producer Elvis, musically known as EL.

On the 28th of October all legs lead to the aviation social center at exactly 5pm till late for a night of music and love.

The event forms part of this year's Parliamentary week celebrations held annually in Regent University and it promises to be exciting, invigorating, entertainment and fun.

In an interview with the school's Deputy Minister of parliament Master Brian Anderson, he made known that this year's students week celebrations, popularly known as 'Parliamentary week' is of a difference, a standard that will treat everyone, not just students but the whole public as they partake from the 22nd to the 31st of October 2010.

He also stressed that, 'there is life in Regent University, apart from the 'Prestigious Jam Night', which is normally called the artiste night, all other activities lined up for the week will get both students and the general public in the mood of relaxation and excitement'.

Further on, Master Brian explained his reason as, 'it is simply because of the theme chosen for this year's week celebrations, which is, 'Learn Hard, Play Hard'.

As students, there is a need to blend information with education and to be able to entertain yourself, allowing your mind to relax, refresh and ponder over what you have installed so far.

The Minister of Entertainment who gave the week's activities to precede the Jam night had this to say, 'the whole week starts off on the 22nd of October, were we will be having the launch in the school, 23rd October, which is a Saturday, a float will take place and basically it is to invite, with the aim of changing perceptions of people about the school, especially the youth, both Post graduate and under graduate.

In addition, the Minister said, 24th October, a Sunday will host the special gospel praise show; he decided to keep the artiste for that show, explaining that there is a surprise package for lovers of gospel music.

25th and 26th of October, the Monday and Tuesday, there is going to be a cooking competition with indoor games, health day and a career, investment fair respectively.

Inter society sports competition will take place at the Elwak Sports stadium, 37 road on the 27th of October, while the big one 'Prestigious Jam Night with an after party will be on the 28th of October 2010.

Sajuna Beach Resort inside Akosombo will be ready with open hands to welcome the general public and students on the 29th of October 2010 for the lake side trip and after party for the Prestigious Germ Night.

In everything let's give thanks and praise to God, hence on the 31st of October, we give thanks to the Almighty God for a successful week celebration, the Minister said finally as he smiled continuously.

Honestly this looks like more fun for a week celebration, the likes of Motombo the Poet, among others will be passing through, it also welcomes all students within and outside the capital especially the Prestigious Jam Night.

I mean, come on it looks like our week just got better with the Parliamentary week celebrations to be held on Regent University Graphic road Campus why don't you come learn hard and play hard with them.

Wait a minute, what about an entertainment minister for Ghana, seriously think about that one.