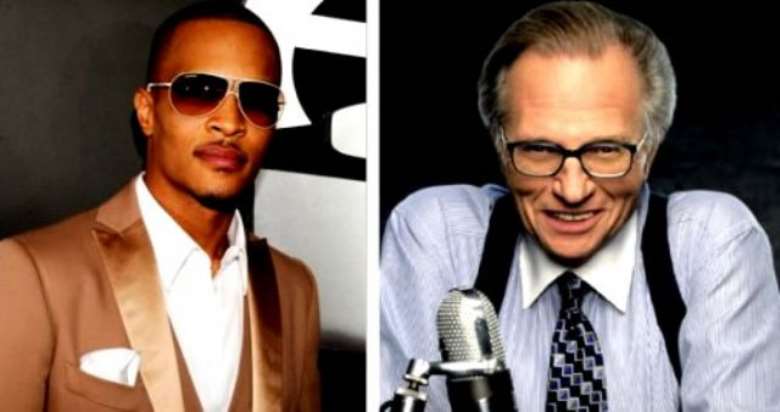 Rapper T.I. a.k.a Tip a.k.a The King, on Thursday night (May 13) sat face-to-face with CNN's Larry King — his first in-depth interview since leaving prison. The television King kept his questions hard-hitting and pointed at the rap King.

Clifford "T.I." Harris was sentenced to one year and one day of prison last year following his arrest in October 2007 for attempting to illegally purchase firearms. The rapper was subsequently released to a halfway house in December to serve out the remainder of his sentence before his ultimate release at the end of March. King got right to the point and asked T.I. why he attempted the purchase of firearms in the first place.

"It came from an attempt that was made on my life," T.I. said. "My best friend had died in my arms. It caused a state of depression and paranoia. My judgment was jaded, and I felt my life was in danger. ... At the time, when I felt the need to have these things, I never took into consideration the legalities; I only took into consideration the protection of my life and family."

King pressed Tip on whether he has truly put the "trouble" behind him. T.I. insisted saying, "I'm a gangster no more'. He absolutely does not own a weapon and he is looking toward the future and to evolve.

Throughout the interview, T.I. was calm and composed and answered all of King's questions without pause — save for when the CNN vet asked if he had ever shot a gun at anyone. T.I. called out the Fifth Amendment before answering that he had shot a gun "at a range."

Despite the consequences, anything having to do with drugs or guns was referred to as "my past." T.I. seemed genuinely focused on his future, working with at-risk youth and mentioned his love for his six children and "special lady" Tameka. He also reiterated his personal responsibility in moving on from the events that led to his incarceration.

"The main thing I can do to protect myself in the future is to understand my position," he said. "I can't put myself in an environment where it will require me to have a handgun. I just stay places where I can be cool. I have security now. ... I take full responsibility for everything that happened to me. I'm a full believer that your life is what you make it. Society doesn't owe you anything."

Officer arrested for forcefully kissing the thighs of woman ...
59 minutes ago