Kwabena on his Failed Marriage 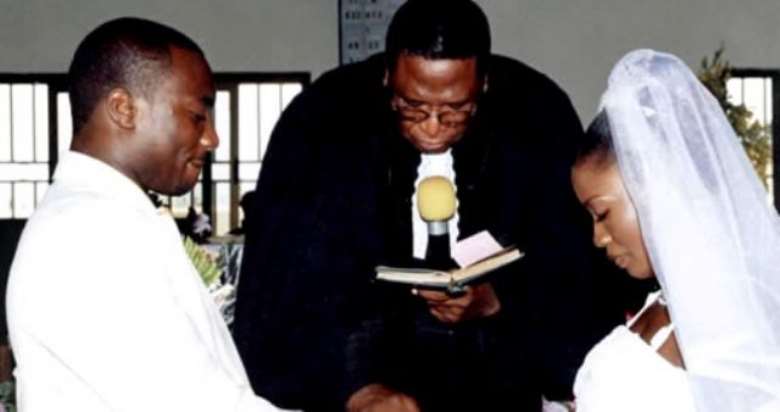 After several weeks of keeping mum over his marriage controversy, suave music star Kwabena Kwabena, has finally found his voice to speak on the issue. He has told Showbiz in an exclusive interview that

the short period between his marriage and its breakdown has been “the most difficult period in my life”.

Last July, Kwabena Kwabena's marriage was said to have been under threat following claims he had impregnated another woman. This revelation, according to 'ShowGhana' was made by the musician's sister in law, Cindy, when she was interviewed on Accra's Radio Gold. She claimed that the musician had left his marital home and was no longer wearing his wedding band.

Then on July 14, the 'Weekly Fylla' newspaper reported that the musician had impregnated a woman before his highly publicised marriage and had denied the allegation but was later present at the “denied” baby's naming ceremony to name the child after his mother. He was said to have left his marital home and had moved in with another woman who was also pregnant and about to be engaged to the star. But Kwabena Kwabena blamed the breakdown in the marriage on his wife Esther who he said gave too much ear to tale bearers. He told Showbiz last Friday at his North Kaneshie home that Esther often worked herself into a frenzy over these tales. “When she could not bear the pain she was persistently inflicting on herself, she carried the tales which she interpreted as bad treatment to members of her family”, Kwabena Kwabena said.

Kwabena Kwabena said he tried through sustained explanations and assurances to discourage his wife from listening to her informants since it only worked her up emotionally and did not bring her any other benefit.

“I did not have to stay away from home for long, even if the purpose was for something that could be of mutual benefit to us. Working late at studio or going into meetings that dragged into the late hours of the evenings were all considered as getting into affairs with other women.“There were other problems but I prefer not go public on them because that could affect the future of the only child in that marriage. I am very sure that I did my best to make that marriage work. Maybe she also tried, marriages do not end overnight, I guess we both tried.”

Pushed to prove that he did all he could to make the marriage work, he went for his phone and played back two recorded conversations in which two different women cast serious aspersions on him. “What you have just heard are some of the insults I got regularly from my wife and her mother and while these lasted, I wept most of the time, sometimes while driving but normally when I was alone in my bedroom.” “I picked a new girlfriend when it became obvious that our marriage was heading for a breakdown and when Esther also realized this, our house became one hell of a place. Insults on the phone were extended to other members of my family with my mother getting the worse part.”

He said that was the immediate cause of the separation the church granted for them. “Since then I have regained my peace and I'm concentrating on writing new songs and producing them.” Kwabena Kwabena said he was ready with his third album Bibini which he said would be released sometime this week. The album carries a total of 10 songs, he said, some of which are My Baby, Abotre, Meretwewo, Obiniyam, Dadie Anoma and Bibini.

"It's a great time to invest in Ghana, the safest country in...
35 minutes ago