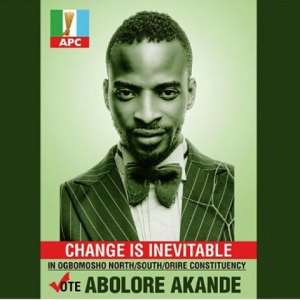 Until now, what we heard was that 9ice has delved into politics but he didn't say which party he's running under...

Well, his campaign poster is out and the Alapomeji crooner is looking stunning as usual.

He's running for the House of Representatives under APC, in Ogbomoso North/South/Orire Constituency...

And, he's not contesting with his popular name '9ice'...he opted for 'Abolore Akande'.

So it's now official.

Congrats and good luck to him!

Actress and Singer, Tonto Dikeh And Her So Many Controversies

Pastor Kumuyi Offers To Resign Due To Son's Wedding Controversy