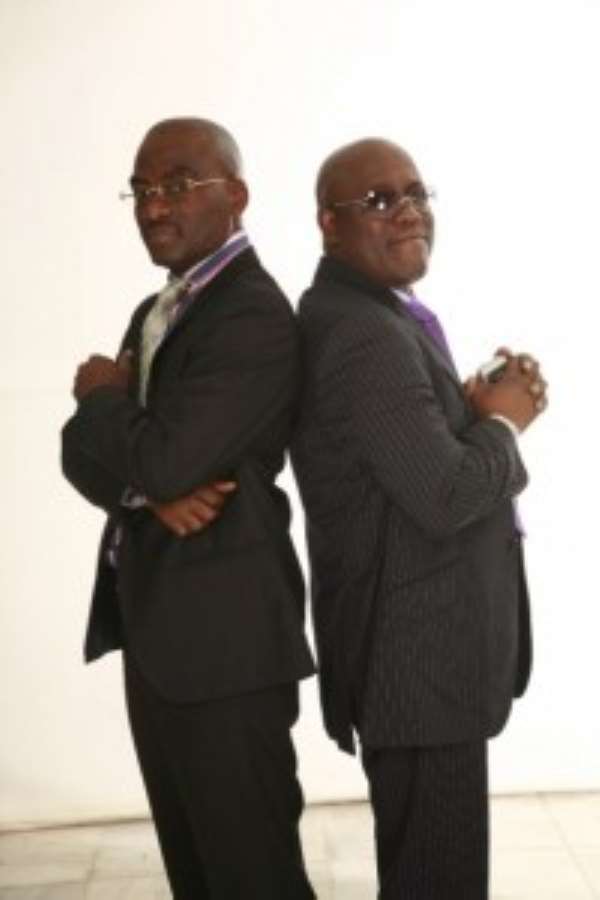 Kenny Ogungbe & Dayo Adeneye (Ke-Ke & Dee 0ne) literally raised the Nigerian entertainment scene from the dead, and changed the face of entertainment in Nigeria. They have indeed shown that show business requires managerial skills and entrepreneurial ability. Having trained in the entertainment capital of the world, Hollywood, California, in the Untied States of America, they came back to Nigeria with in-depth knowledge of what they wanted to achieve.

Kennis Music revived the music industry and took it to a whole new level, putting Nigeria on the global music scene. Riding the wave of the revolution started by Ray Power and AIT, the duo gave Nigerian music a new spin and threw up a new generation of stars like Eedris Abdulkareem,Tuface Idibia,Tony Tetuila,Eddy Remedy,Paul Play,Slam,KSB to mention a few. This effectively set the stage for the explosion in the music scene and Nigeria's dominance and Africa and inroads into America, UK, Europe and globally.

It came as a shock when news broke some days back that the duo has parted ways.

Dayo D1 Adeneye one of the parties involved has finally summoned the courage to deny there is any rift going on.

Friends,pls do not encourage those MORONS trying to spoil our good name/brand by helping them spread the false rumours.Keke and myself remain the best of friends and biz partners.We have been friends since the days of garri n ewa agoyin and would never ever let money come between us.There is no iota of truth to the rubbish being circulated on the internet.God bless.

Below is the complete story of the false rumour.

The godfathers of Nigeria's hip hop music, and popular radio/ television personalities, Kenny Ogungbe and his partner, Dayo Adeneye of Primetime Entertainment have decided to go their separate ways, after over ten years of partnership.

The duo of Kenny and Dayo with their entertainment outfit revolutionalized the hip hop genre of music in this part or the world through their numerous radio and television programme in the early 1990s. They popularized the first major hip-hop group in Nigeria called – Remedies. These groups actually changed the face of Nigeria's hip hop music scene.

It would be recalled that they are one of Nigeria's biggest hip hop export known all Africa with several awards to show for it.

The group – Remedies had artiste like Tony Tetuila who shook the nation's music scene with his hit track, 'you don hit my car'. Eedris Abdulkareem thrilled everyone with his 'Mr Lecturer' banger and also caught the attention of former President Olusegun Obasanjo with 'Nigeria jaga jaga' song. The third member of the Remedies was Eddy Remedy. These groups began the journey of the modern hip hop music and their popularity was the handiwork of Kenny Ogungbe and Dayo Adeneye who were managing them.

Until recent times Kenny and Dayo were always seen together at any public function. They received awards together, drove the same type of cars and their fans refer to them as 'twins'. But all that has changed as Kenny and Dayo, popularly called D One have decided to say goodbye to their union, but keeping it from the public.

We gathered exclusively that a multi-million naira deal with Africa's telecoms giant MTN tore them apart, and Kenny Ogungbe's younger brother Idowu Ogungbe also called ID Ogungbe was instrumental to the break up.

Our source informed us that after the expiration of their earlier MTN deal few years ago which got the duo of Kenny and D One, two MTN branded H2 Hummer jeeps, efforts to renew it proved abortive as the terms proposed by D1 to MTN was turned down while the telecoms company made a less juicy offer which D One also rejected. The deal was for Primetime Entertainment, jointly owned by Kenny and D One.

We learnt that Kenny's younger brother, ID Ogungbe later went to his elder brother, and talked him into going to MTN to negotiate the offer that D One rejected for Primetime Entertainment and accept it for Kennis Music. Kennis Music is a record label and management company owned by Kenny Ogbungbe with bigger involvement of ID Ogungbe, while D One has little stake.

The source said Kenny fell for ID's idea and they went into the deal with MTN for Kennis Music, and that immediately the deal was sealed, the telecoms company provided a branded bus for Kennis Music artistes, billed all artistes of Kennis Music to perform at the MTN 10th year anniversary events across the country and paid some millions of naira to Kennis music management.

It was gathered that all the transactions were done without the knowledge of D One, only for him to start seeing the new developments. Our source claimed D One asked his partner what was happening and Kenny explained the details, but said it was ID that prompted him to go for the deal.

We learnt that D One was furious that his idea was used without his knowledge and the Ogungbe brothers hid it from him until an insider in the telecoms company asked why he had not been coming for meetings while the negotiations was going on.

It was gathered that before the arrival of ID Ogungbe from America few years back, the duo of Kenny and D One rarely had disagreements, but now, it's the order of the day, with issues ranging from finances to management decisions.

It was alleged that when ID came on the Primetime TV programme with a segment called ID on the street, D1 asked Kenny what was ID's stake and Kenny reportedly said that ID was working with Kennis Music and not a partner in Primetime Entertainment, but that any advert on his segment will be shared by both ID and Primetime Entertainment.

The recent development has made D One to have a rethink on his relationship with Kenny, and he has been boycotting the popular Kennis Music Primetime show on Raypower FM while Kenny kept telling listeners that D One was on assignment, but it has come to a point where he doesn't bother to tell the listeners anything about his partner. D One also recently turned down a trip to Califonia, US where the duo was expected to grace an event.

Now, people don't see them together at events anymore, and even when they are spotted in the same place, they are always metres away from each other.

Meanwhile, we learnt authoritatively that D One is already cooking his own independent television programme which will soon be aired on television stations across the country.

''It's a celebrity interview programme. It will be syndicated on national television stations,'' our source said.

I won’t bow to pressure to make Parliament a ‘rubber stamp o...
31 minutes ago