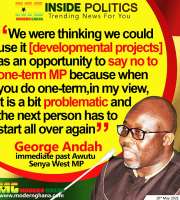 The Guan are believed to have begun to migrate from the Mossi region of modern Burkina around A.D. 1000. Moving gradually through the Volta valley in a southerly direction, they created settlements along the Black Volta, throughout the Afram Plains, in the Volta Gorge, and in the Akwapim Hills before moving farther south onto the coastal plains. Some scholars postulate that the wide distribution of the Guan suggests that they were the Neolithic population of the region. Later migrations by other groups such as the Akan, Ewe, and Ga-Adangbe into Guan-settled areas would then have led to the development of Guan-speaking enclaves along the Volta and within the coastal plains. The Guan have been heavily influenced by their neighbors. The Efutu, a subgroup of the Guan, for example, continue to speak Guan dialects, but have adopted (with modifications) the Fante version of some Akan institutions and the use of some Fante words in their rituals. As far as the other Guan subgroups are concered, the Anum-Boso speak a local Ewe dialect, whereas the Larteh and Kyerepong have customs similar to Akwapim groups.

Constituting about a quarter of the Guan, the Gonja to the north have also been influenced by other groups. The Gonja are ruled by members of a dynasty, probably Mande in origin. The area is peopled by a variety of groups, some of which do not speak Guan. The ruling dynasty, however, does speak Guan, as do substantial numbers of commoners. Although neither the rulers nor most of the commoners are Muslims, a group of Muslims accompanied the Mande invaders and have since occupied a special position as scribes and traders.

The Gonja founded one of several northern kingdoms. In the eighteenth century, they, like their neighbors, were defeated by the expanding Asante Empire. Gonja became part of the British Northern Territories after the fall of Asante. Even though long-distance commerce led to the development of major markets, the Gonja continued to be subsistence farmers and migrant workers.