Repented Moesha back, flaunts her body 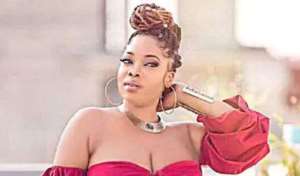 Socialite Moesha Budoung has given hints, she may be returning to her old ways on social media, several years after allegedly surrendering her life to 'worshipping Jesus Christ.'

In her alleged latest video in circulation, she could be seen gyrating to a song by Ayra Starr 'Rush'.

She danced wildly and made some suggestive movements while she seductively touched her breast and others.

A red bodycom she was wearing indeed showed her body contours, leaving many people to wonder if she hadn't gone back to her old ways.

In June 2019 the actress and socialite who was once known for flaunting her curvy body on social media shockingly announced that she has given her life to God and would henceforth lead a Christ-like life.

She went on to ask her followers not to be surprised when they see her preaching.

Later she was captured in other videos on social media preaching the word of God to some people in a bid to win souls for the kingdom of God and also confessing to an attempt to kill herself.

After that incident, a lot happened in her life.

Since that time she has made posts and comments on social media but not anything commercial related. Now she said she is open for business.