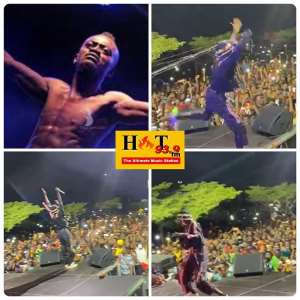 This year’s 'Dope Concert was headlined by great artists like Black Sheriff, Kuami Eugene, Kidi, Lil Win among others. The much-publicised event was heavily patronised by a lot of people from the Achimota area and it’s neighbouring vicinities.

As usual, immediately the MC for the night introduced Lil Win on stage to perform there were tumultuous Cheers from the crowd. The 'Corner Corner' crooner delivered a spirited performance to the admiration of all.

He took to the stage in his well-designed African apparel before taking off the outfit, sweating through his electrifying act. He did not exert much energy while performing his songs as fans grasped each one of them and owned it.

It was extremely amazing how the fans joined him during his performance by dancing and singing alongside as he dropped the back to back hit songs on stage. His technique on the microphone, and his interaction with the tumultuous crowd was pure class.

Fans who spoke with Hotfmghana.com after the show named him as the best performer on the night.

Watch the excerpts of his performance in the video below!