Female artiste not given opportunity to perform at Shatta Wale show 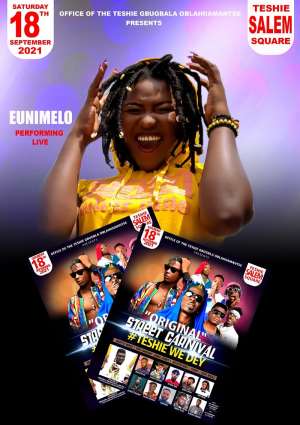 Euni Melo Ghana's very own female songstress, who recently was on a project with legendary lucky dube's leading backing vocalist Phumi Maduna was in a shock when organizers of Shatta Wale 's 'Teshie we dey' concert prevented her from performing.

She said her name wasn't billed meanwhile a member of the organizing team had put her name on the flyer.

Other members stated lateness as a reason Whiles the artiste in question was present by 8:30 pm.

Euni Melo is by far Teshie's biggest female act with over 30 songs, an album and multiple international collaborations. She is popularly for her multiple award winning exploits since 2019 till date and was part of DJ Manni's most influential promising artistes in his recent selection.

Euni Melo is the female act in the past three years being consistently nominated in the emerging music awards, with over 12 nominations.

The most bizarre situation was the fact that she was among just about 5 female artistes counted at the venue compared to about 30 males, yet she never had a chance to perform.

It is no surprise how female artistes are losing interest in a male dominated space due to lack of opportunities.