I'm going to preach the word of God, He saved me from the dark – Moesha Boduong 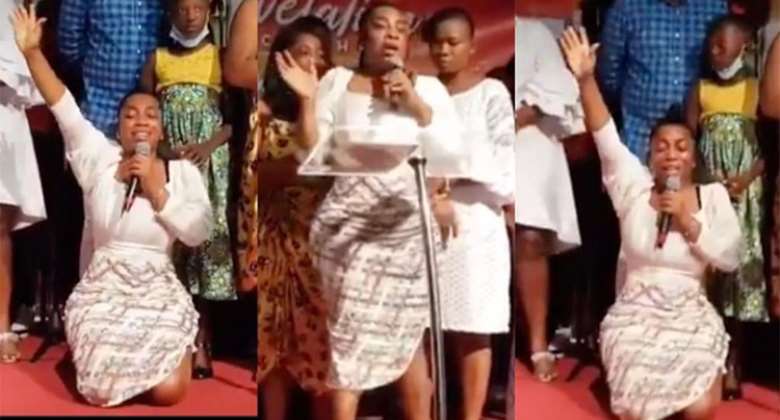 Ghanaian socialite, Moesha Buduong, says she has surrendered her life to Jesus Christ and would henceforth preach the word of God.

Videos of the curvy lady in church service in Accra have since gone viral on social media.

She was captured weeping as she gave her life to Christ. In two of the videos spotted by NEWS-ONE, she was thankful to God for saving her and her family.

“Don't be surprised when you see me talking about God or preaching the word because that's what I have decided to do from now forever and ever. God bless you,” she indicated.

“This is one of things that has ever happened to me. I am so glad He saved me from the dark. Father Lord Jesus I can't stop thanking you enough. Help me say thank you to Him,” Moesha also said in the second video.

She mentioned that she was invited to the Revelation Church by model Victoria Michael, where she had an encounter with God.

She trended heavily on Twitter on Sunday after videos of her at the church hit the internet. Some Ghanaians were happy to see Moesha give her life to Jesus Christ while others just trolled her.

Moesha became very popular in Ghana in April 2018 due to her comments on CNN that Ghana’s economy is so bad that women are compelled to have sexual affairs with men just to survive.

“Ghana our economy is such that you just need someone to take care of you because you can't make enough money as a woman here,” she told host Christiane Amanpour on her show, Sex & Love Around The World.

She, however, didn't have it easy with Ghanaians who took to social media to criticise her statement at the time. She subsequently apologised for the comment.

The actress and socialite who is known for flaunting her body on social media is now submitting her life to God and is expected to lead a Christ-like life henceforth.

More from Industry News
ModernGhana Links
Our colleagues always pull us down, but we keep going because we're focused — Gyakie
Ministry of Tourism have reached out to my team – Kirani Ayat drops intention to sue
We acquired Ayat’s video from SAMSAL Agency — GTA reveals
TOP STORIES