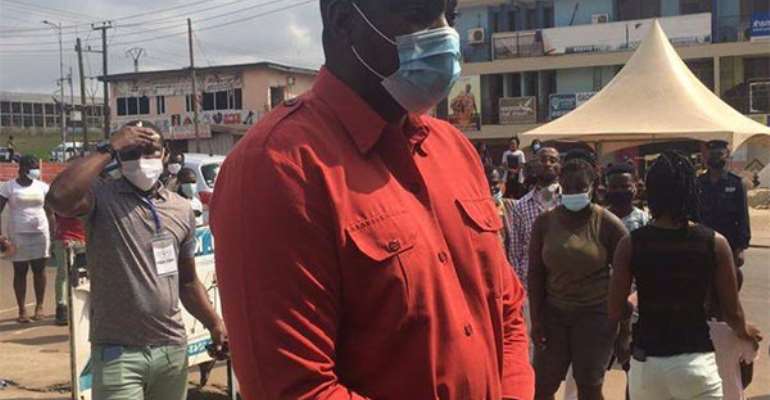 John was the National Democratic Congress' Parliamentary Candidate for the Ayawaso West Wuogon Constituency in the parliamentary elections.

He and the incumbent New Patriotic Party's (NPP) Parliamentary Candidate, Lydia Alhassan were the front runners in the elections at the constituency. They keenly contested the seat but Lydia retained it for the NPP.

A video of John Dumelo from the polling station where he voted, showed him looking all edgy and in pain. He couldn't sit properly.

He was mocked by social media users and subsequently trended on Twitter as a result.

“The money Dumelo had from acting all he take do politics. As the movie industry cast dierr unless he go act Efie wura for TV3 like that o,” Twitter user @Tef_lon_don said.

“I stay at Tema but I transferred my vote to Ayawaso West. I’m soo happy my vote against Dumelo wasn’t in vain,” @Akua_Nissi also said.

“Maa Lydia is doing to Dumelo what Bayern did to my team Barcelona. Masre saaa,” @Eny3_mani_aa1 also tweeted.

Inside Politics: Political Quotes
Catch up with all the political quotes from our politicians.
Sponsored
More Exclusive News
Modern Ghana Links
“You’re so shameless, you're either sleeping with the men I date or work with” – Afia Schwar fires more shots at Mzbel
Kweku Flick warns Ghanaians to stop comparing him to Kwesi Arthur
Afia Schwar reacts to Mzbel’s task to ‘Naa Yewe’ to kill her
How Slay Queen dies after being sexually harassed on stage
Young man cries as he tries to end his life over broken heart
Chief priest defrauded me GHC2,000 over case against Afia Schwarzenegger – Mzbel claims
Stop giving your money to pastors to buy Rolls Royce while you walk in 'chale -Wote' to church – Asamoah Gyan advises Christians
Official: Lady Gaga, J Lo to perform at Biden’s inauguration
Bulldog Released And Granted Bail
Election Reports Quotes Dossiers
TOP STORIES