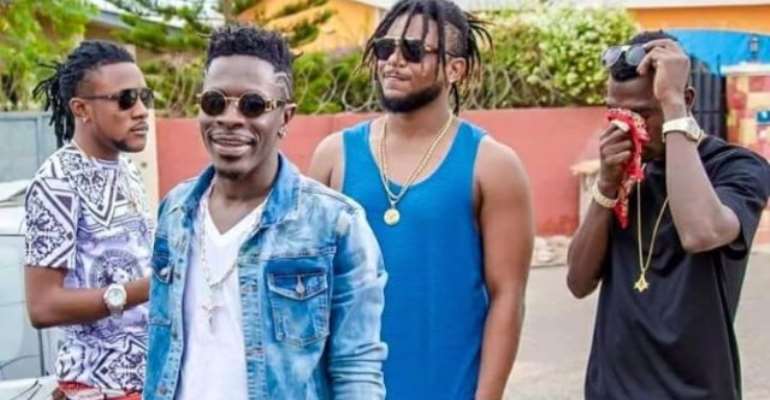 On Tuesday, December 17, Shatta Wale announced that he will give out two cars to two lucky fans. The artiste promised via a post on Facebook that he will gift 10 phones to female fans.

Information gathered by Hitz FM’s ‘You Sey Weytin’ team from close source indicates that Shatta Wale is trying to strengthen his fan base and recruit new team members after parting ways with some of his very close friends.

He is said to have dissolved the popular music group, Militants, which he formed. The trio included Addi Self, Captan and Joint 77.

From left to right: Joint 77, Addi Self and Captan
The source said the ‘Melissa’ hitmaker sacked his Militants because they had constantly meddled in his personal affairs.

Shatta Wale seemingly confirmed this claim in an interview with Da Don on Hitz FM‘s ‘You Sey Weytin’ while revealing the purpose for sharing cars and phones.

“I just decided to show appreciation to the ones who are constantly doing the work….they can stay loyal to the movement. If you are a fan, all you care about is the music and how we can push the brand to the next level is what is important.”

“Some of the fans, sometimes they want to come into your personal life and things. It is an example to just show other fans that when you are supporting an artiste, his personal life is different from his professional life,” he said.

The rumour that Shatta Wale has sacked the Militants comes months after showing his cousin, Blade, the exit in the Shatta Movement camp. Further checks revealed that the artiste has not posted anything about the Militants for close to a month.

The artiste in the past, constantly promoted the works of the Militants and even shared their Facebook posts on his wall.

Surprisingly, Shatta Wale who always mounts the stage with his Militants, performed alone at his recent Mpatuam concert on Farmers’ Day.

Shatta Wale and his militants in Taking Over video
In the live Facebook video of the event, Shatta Wale, single-handedly performed ‘Taking Over’, a song he recorded and mostly performed with the Militants.

The close source also revealed that the Militants are currently pleading with the singer to rejoin the core team.